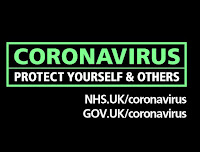 I mentioned in yesterday's post that, at least in Thanet, people appeared to be observing the Government's instructions to limit the number of times they left the house and to observe social distancing rules on the occasions that they did so.

The Government's official website currently has a banner with the following information:
"Stay at home. Only go outside for food, health reasons or work (but only if you cannot work from home.)
If you go out, stay 2 metres (6ft) away from other people at all times. Wash your hands as soon as you get home. Do not meet others, even friends or family.
You can spread the virus even if you don’t have symptoms."

The website itself gives more details. For example, you are allowed out for exercise, but only once per day, limited to an hour, and observing the standard distance of 2 metres. You should go out alone - unless you are with members of your household. Walking your dog should, apparently, be combined with the exercise period, and only be the one trip a day. Presumably, should you have a dog which is used to going out both morning and evening, then it has to cross its legs.

I made a few comments about the lack of consistency shown by the Bishops of England & Wales in shutting all the churches. However, the inconsistencies in official guidelines / regulations / laws* (*take your pick - it seems to depend on who's talking) is somewhat disconcerting. A lot of the goodwill which accompanied the original request for lockdown will be lost, and if this continues, it will inevitably lead to civil disobedience. From what I have seen so far, the confusion is already feeding into different conspiracy theories circulating online.

Now, it is always possible that the inconsistencies are purely and simply due to confusion, incompetence, over-zealousness, and people being, well, people. To be fair, this is the most likely reason. However, we have been lied to by various authorities and organisations right from the start, so it is hardly surprising that people worry when 2 + 2 doesn't appear to add up to 4.

Initial reports suggested that contaminated meat came from a wet-market in Wuhan, China. Bat soup was mentioned, and most of the press reports continue to push this theory (though they try to downplay the fact that it started in China because, well, racist...). The Chinese government definitely lied to the World Health Organisation about when the outbreak actually started, which made other countries slower to react to the threat than they might otherwise have been. But back in February I realised that there was a Level 4 laboratory in Wuhan (I mentioned before that I have an interest in research on viruses) and the emergence in Wuhan of a coronavirus which was carried by bats, and bearing similarities to the SARS virus was just a bit too much of a coincidence.

Two months ago I tweeted a query about this to a friend, and was discouraged from pursuing the matter, being told it was rumour-spreading, and anyway the cause was irrelevant. Now, following further revelations about safety procedures from people working in the lab, the reports of the destruction of medical files (and blood samples) on a new respiratory virus back in late November / early December and the speed with which field hospitals were constructed - practically overnight - in Wuhan once the seriousness had been admitted to the WHO, I am not the only person wondering about that Level 4 laboratory. I am not suggesting that there was a deliberate release of a biological weapon, or even that it was being researched as a biological weapon. I am of the opinion that poor safety procedures led to the escape of a virus which was being studied.

With air travel being as easy as it is, the threat of global infections has increased considerably. We have had SARS (2002-2004), H1N1/09  "swine flu" (2009-2010), MERS (2012), Ebola (2013-16) and Zika (2015-16) and with the outbreak of each of these we were warned that they could devastate the human race. We also had the normal outbreaks of "seasonal" flu, which actually caused large numbers of deaths on a yearly basis. However, with none of these did the Prime Minister of the time feel it necessary to give a press conference warning that our loved ones could die from it. The NHS came under pressure, but there was no call to shut schools across the whole country. No lockdowns. And, while the press has been critical about the delay in calling for a shutdown, it all happened relatively quickly.

So, what information about the virus prompted this action?

In a similar way, the advice about going out has been inconsistent. People are being told to work from home where possible. But, supermarkets are still open for business. Now, by reason of queuing systems, barriers around tills and limiting numbers, one can ensure a certain amount of social distancing, but it isn't easy. On the other hand, people actually are allowed to travel to work, even if they are not deemed to be essential workers, if it is not possible for them to work from home. As a result, public transport is still operating. But the Mayor of London decided to cut the number of tube trains available (in order to discourage travel) with the result that people are having to go to work on crowded trains, unable to keep their distance. Many of these workers are in the hospitals, being exposed to cases of the coronavirus... and, even if they do not have any symptoms themselves, we are told that they can still spread the virus...

Schools are still open for the children of essential workers. I am a teacher, albeit not in work while waiting for knee surgery. I know from experience the size of classrooms, and the number of children still attending school because they are considered vulnerable or are children of essential workers etc. I do not for one minute believe that the children are all being kept two metres apart. That's just not going to happen. So all these children are circulating and are presumably able to spread the virus among themselves, even if they are not showing any symptoms... and then they go back to their homes at the end of the day. On public transport, for the most part.

But people have to stay at home, and can only go out once a day for exercise. There have been reports of some people being moved on by police because they were deemed not to be exercising but were instead sitting down to enjoy the sunshine. Even though these people were observing the need to keep two metres apart, they were deemed to be breaking the regulations. Various councils, horrified, decided to close their local parks, to encourage compliance. People have been fined. It won't be long before people are arrested for non-compliance.

It is generally understood that UV radiation helps to break down viruses. Viruses are strands of DNA or RNA surrounded by a protein coat, and both DNA and RNA are damaged by UV radiation (it is what causes skin cancers.) There have been reports contradicting this, stating that the amount of UV light needed to kill the virus would be harmful to human skin, but a quick look on Google revealed at least one paper which had studied the effect of UV light on various viruses designed for "biodefense" - the authors used the data to calculate how much normal sunlight would be needed to destroy the viruses (solar inactivation) at different locations (presumably because they get different strengths of sunlight at different latitudes.) They concluded that:

"A midday solar effective flux of 0.17 J/m2254/min (implying a daily total fluence of approximately 50 J/m2254) might be “marginally effective” for inactivating viruses relevant to biodefense, e.g., a full-day exposure would produce about a 3-log decrease in infectivity for the more-UV-sensitive and much less for less-UV-sensitive viruses."

So, while sitting still in the sunshine isn't guaranteed to inactivate the virus, it isn't going to hurt. If anything, it will boost people's immune systems because of the increased Vitamin D production. And why, if social distancing is being maintained, is sitting still in the sunshine going to be so much more risky than running around? Are they afraid the coronavirus might catch up with people if they stay still? Or is it simply that the opportunity to take away basic freedoms has been too much to resist for some authorities?

As I said, the regulations being imposed are inconsistent. This has been exacerbated by what has been perceived as heavy-handed, authoritarian policing of those regulations in some parts of the country. The most likely explanation is that people in charge made sweeping regulations without thinking through the implications and are now unwilling to be seen to contradict themselves or admit overreaction. But frankly, the best way to ensure that people actually comply with whatever regulations are being put in place is to explain exactly why they are needed. Merely telling some people that they have to stay at home isn't the way to do it.
Posted by Mulier Fortis on 6.4.20

A belated “welcome back!” I tried to comment on your previous posts, but Google seemed to think I did not exist. I have missed you greatly. It’s so good to see - read you again!

Excellent post. If I hate anyone right now, besides the Chinese government, it's the Daily Fail rag. Hope their offices burn to the ground. All of their scribblers on the US stories are hit pieces to try and take down Trump. You would never know from them that the UK has twice the death rate on a per capita basis than the UK than the US, and both our countries are doing far better than most countries in Europe. Daily Fail wants everyone to think "one size fits all." In particular NYC and London were bound to be dumpsters due to both cities being densely populated, air travel lynchpins, and heavily reliant on public transport.