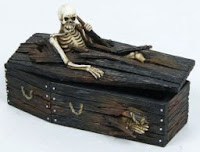 I have a ghoulish sense of humour. The mental images conjured up when I saw the poster advertising our local cemetery "Open Day" made me chuckle. Apocalyptic visions interspersed with comparisons of coffin styles sprang to mind. Then I read the poster more carefully, and discovered that it was actually the crematorium which was having the Open Day, not the cemetery...

On being told that everything was open for viewing, I decided that this was just too good an opportunity to miss. I have always loved murder mysteries, and the best way to dispose of the evidence has got to be cremation. None of this "let's exhume the body and get the evidence several years after the event" mucking around.

I knew there was to be a service blessing some new memorial niches, and a Remembrance Service, but I was really keen to see the hardware. I rather sheepishly asked someone about the advertised guided tour (I didn't want to appear ghoulish!) and he immediately offered to escort me round. In fact, so immediate was the response, that I started to wonder if I might actually end up as part of the exhibition: "Please just walk in, Madam... don't panic, I'll just shut the door behind you so you can get a feel for the place, mwah ha ha..." and now, ladies and gents, here's one we prepared earlier... 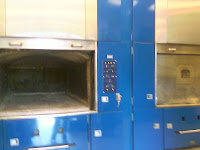 Anyway, the chap brought me round through a chapel and into the room with all the ovens. He told me a bit about how it all worked, and then took me through to the automated control room. There were already several examples which had indeed been "prepared earlier" - in two categories: those who were to be placed carefully in the memorial garden under a rosebush or something (the location was carefully documented) and those referred to as the "takeaways."

At this point another guide showed up, and took me in hand. Apparently the first guide shouldn't have been showing people round the ovens at all, he should have been taking photographs in the gardens... somewhat crestfallen, he reluctantly relinquished custody to the official guide. I think he'd been enjoying himself... 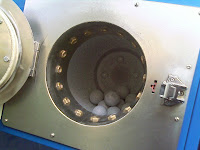 I was taken back to the ovens, and lots more information was given. I now know that the ovens operate at 800°C... and that the gases are not released immediately, but are held for 2.5 seconds to allow the dioxins to react fully (or something like that) ... I even got shown the cremulator, which basically ensures that all the bones are ground to a fine dust, and various metal bits can be sieved out...

I did begin to wonder whether maybe I was being mistaken for someone else, as several times I was reassured that environmental pollution standards were being adhered to... and that all the certification which came with each body had to match up, and that the documents for each person were moved with the body at each step (outside the ovens, obviously!) And then I realised that it was probably even more basic than that: I suspect that the people at the crematorium don't generally get to talk to others about their work. I guess that the people they usually see are generally rather upset, and not terribly interested in the mechanics of how darling aunt Mabel is being disposed of.

It did occur to me that this would make a brilliant Science trip for school...

The afternoon finished up with a Remembrance Service. This turned out to be hugely entertaining. The organist appeared to be enjoying the opportunity to interact with his audience, and started us off before the service with requests, which he played very well (without sheet music, as far as I could see) on the organ (which didn't do him justice, in my humble opinion... though a proper musician might correct me on that.) I requested (and got) Bach's Ave Maria, someone else asked for Handel's Largo, another person asked for Greensleeves. With each piece of music, the organist told us whether it was a popular one for funerals, who the composer was, or some little snippet of information. 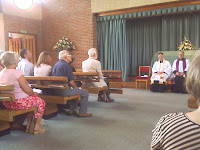 The service proper was conducted by an Anglican priest, a Catholic priest (Fr. Tim) and a humanist "minister." The humanist refused to sit out at the front with the two priests, on the chair provided for him. There were three hymns and some readings from the Bible, and some prayers... the humanist seemed to be rather out on a limb, and his choice of reading (from The Rubiyat of Omar Khayyam) was pretty bizarre... I mean, it probably would have made total sense at a humanist cremation (though a bit insensitive - the upshot of the piece was that we're here for a time, and then it's curtains, and that's your lot, matey!) but I doubt that you'd get many humanists at a service where the aim was to pray for the deceased! So the people present didn't seem to know what to make of his reading at all... and I was trying very hard not to laugh...

All in all, a very enjoyable way to spend a Sunday afternoon.
Posted by Mulier Fortis on 8.6.08

This is surely a joke

Ummmm... no, this is how I spent this afternoon!

Wow. At least at the end of a timeshare presentation they give you some parting gifts! I'd have fun thinking up parting gifts for this one....toaster? Microwave? I never could see why people would choose to be cremated, but I suppose "whatever."

This is my last visit to your site.As a Catholic,I am very offended by this post.

Actually, I think this is one of the least offensive of my posts...

I can't believe you never asked the organist for "Colours of Day".

Anon...well, don't hold a grudge or anything!

I wasn't at all offended - maybe we have the same sense of humour:)

But I did think it all sounded rather exhausting and am glad I plan to rest quietly in a lovely spot beside my mother in a peaceful cemetery on the side of the Downs.

John from Pomeroy on the Palouse said...

Very interesting post. My father-in-law just passed away and he wanted to be cremated and "spread" around (dusted?) a favorite campground. Our daughter (14) expressed her shock to her grandma and told her that dogs and other animals would do their business all over his ashes if they were around the campground, even if in the bushes. Grandma relented and part will be put in a stream going though it and part in our plot at the local Catholic cemetery.

Our daughter has begun taking pipe organ lessons (started late last year). Her teacher was planning on teaching her some wedding music this summer, but we asked her to teach funeral type music instead as we're in a smallish town (about 2000 people) with an average age over 55. We have about 2-3 funerals a month and maybe 2 or 3 weddings a year.

Thanks for your blogging. I first came and visited several months ago when Fr. Z talked you up and bookmarked you then.)

Brilliant post. I saw a programme on TV a few years ago which portrayed pretty much the same thing - except they used a mortar and pestle to ground up the bits of great aunt Mabel that survived the inferno. Technology has clearly moved on, and they now have the equivalent of the food blender.

While respecting individuals' wishes, if anything was guaranteed to put me off the violence of burning the bodies of our loved ones, it was that programme. Like October 67, I much prefer the solace of quietly sitting by the graveside, knowing my parents (and others) were gently laid to rest in peace.

This reminds me that there are 3 humorous topics, Death, God, and Sex (I think it was Aristotle, or was it Aquianas, who argued that every funny thing could be seen as a variation of one or more of these 3. Forexample, the slipping on a banana bit can be seen as a variation of the Death theme...). Anyway, it was the Greeks who portayed tragedy & comedy as flip sides of the same coin. So when I go, please yuk it up!

For various reasons I was unable to bury my Mother. I made the funeral director take me on a tour of the "facility" before I made my plans for her cremation.

My Mom would have loved this post. She never, ever lost her sense of humor.

I love your sense of humour.

This made me laugh so much. Brilliant. I might suggest one for our local crem. Nothing like focusing on death to make one focus on life. Mac, I do think this is a possible half hour documentary !!