I've Been Preoccupied Of Late... 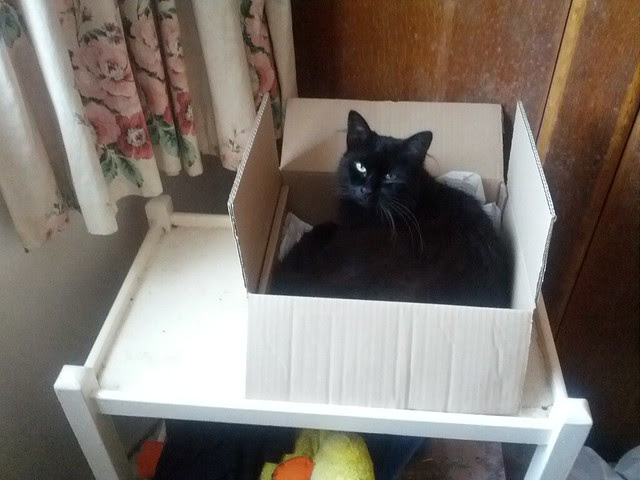 Furretti was giving me cause for concern earlier this week.

I noticed that she appeared to have lost weight - it's difficult to tell just by looking at her, as she is very fluffy, but it seemed to me that she was rather thinner than usual: I thought her pelvic bones were more noticeable when I stroked her, and her vertebrae were rather more pronounced. Furretti didn't seem to be comfortable - she was holding herself rather carefully rather than just curling up on my pillow, and, most worryingly, she didn't purr when I made a fuss of her. She had a scab on her neck (though she wasn't too keen on my examining it) but no other obvious injuries, and was off her food.

When I arrived home on Monday evening, I noted with some concern that she was out (and her food was uneaten) - this was worrying because it had been pouring with rain all afternoon, and Furretti normally loathes getting wet. I wandered around outside, calling her name, and questioning my next-door neighbour. To my consternation, I saw that a fox was lurking near the catflap, and did my best to scare it off - after which Furretti made an appearance.

As luck would have it, I had lent my cat carrier to a friend and had forgotten to retrieve it at the weekend. Fortunately another neighbour had a carrier to lend to me. I then drove over to the vet's surgery, with Furretti yowling all the way.

The vet was very nice, assuring me that it was better to come in earlier rather than later. A thorough examination of the cat was carried out, including a check of her temperature. Furretti does not have a bio-chip, and so her temperature had to be assessed in the traditional manner - a procedure which ruffled her dignity somewhat. Never have I seen a cat look so affronted.

The verdict was then given: Furretti was perfectly healthy, in the vet's professional opinion, but she would be happy to carry out a blood test just to put my mind at rest. Heartless mercenary beast that I am, I made enquiries as to the cost of such blood tests. On hearing that it was in the region of £70 or so - in addition to the consultation fee - I declared myself perfectly content with the professional opinion of the vet. Indeed, Furretti had perked up quite a bit, and seemed keen to leave the surgery...

It was decided that I would monitor her for a few days, and return for a blood test if she didn't show any improvement.

I am delighted to report that Furretti has made a complete recovery...
Posted by Mulier Fortis on 16.11.13

Amazing how cats suddenly improve when they know they're off to the vet's. ('No, no, I'm fine,really and -there- a bite to prove it'). Sounds like a bite that had gone septic or at any rate was hurting and/or fear of foxes. Hope she recovers.