In a shock announcement, it seems that there is, after all, to be a new Cardinal created for England & Wales.

My saved friend, Eccles, gave details of the six new Cardinals to be appointed in the next consistory, and, at first sight it appeared that England & Wales was not to be honoured. However, this was actually an administrative error, so there has been a special catsistory, held for the specific purpose of awarding a red hat for England & Wales.

I can reveal that the new Cardinal was none other than Monsignor Mastai-Furretti. 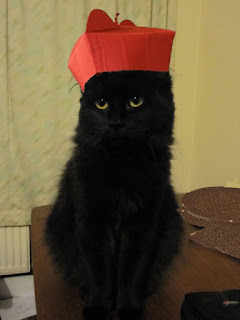 Cardinal Furretti is reported as being rather chuffed by the news, though she did want to send her condolences to Archbishop Vincent Nichols, who has lost out on yet another red hat opportunity...

Mgr. Guido Miaowrini was unavailable for comment. She is sulking. I will probably find a headless pigeon in my bed shortly...
Posted by Mulier Fortis on 28.10.12

Well, well. I never had you down as a supporter of female ordination. LOL.

More Cat-lick than the pope?

Disgraceful! The Biretta is crooked!
But then.....so are some cardinals....allegedly.

the only problem I can forsee mac is at the next conclave; how will she vote secretly without opposable thumbs to write down the name of her prefered choice, and if they elect HER, whats to stop ambitious cardinals using her as a paw to further their own agendas

Will the new Cardinal be involved
in consolidation of Traditional Catholic DOGMA ?

Given the Pope's love of felines, I see rank favouritism at work here. Still, it could just work. I bet anyone from The Tablet would think twice about crossing his path.

JAMC - you obviously have not been following the YouTube sensation, Bertrum Thumbcat, or you would know that cats are working on plans for world domination... just as soon as they evolve opposable thumbs.

My two hooligans manage quite well enough without thumbs as it is... I dread to think what they'd be like with them!

Zephy - that was a particularly low blow.

Fear not, Catholic Trad. Cardinal Furretti is very ecumenical: she believes that anyone can become cat-lick.

Her Cat-o-lick credentials have been proved by her shredding of Mgr. Basil Loftus' article in the Catholic Times, where he appeared to deny the Real Presence (Furretti left a copy of The Remnant unscathed) and her shredding - with the help of Mgr. Guido Miaowrini - of The Tablet (the Catholic Herald passed muster and was not shredded)

Dear Mac I know all about Bertrum Thumbcat and his plans for dommination and have vowed to resist him with an army of German Shepherds, Shelties and Beagles