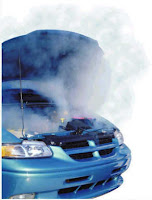 No. I didn't forget the oil. Nor did I forget the water. And there wasn't actually any steam issuing from the engine... the picture is just a bit of poetic license.

However, I thought that there was going to be steam. And maybe even an explosion. The car was making some very unusual noises, and it hasn't ever made them before...

It started like this... I have learned to keep a close eye on the temperature gauge on my dashboard (the car one, not the Blogger one!) The indicator is normally bang on the centre, where there is a little thermometer symbol - helpful for blondes such as myself. If it goes slightly over the symbol, I top up the water in the radiator... it generally doesn't need much, and I've only had to do it a couple of times since my last major mistake.

I went to Bluewater this afternoon. On my way home, I noticed that the indicator was ever so slightly over the middle. I left the car to cool down, and then, a couple of hours later, checked the water and the oil. Both seemed to be fine, though there was rather a lot of water in the overflow container (you remember the overflow container? The one everyone thought was the windscreen wash bottle?) I emptied some of the excess from the overflow, topped up the radiator and proceeded to drive to church for Benediction.

The indicator seemed to stay really low for much longer than usual, but then suddenly it started to race up. It went way over the middle and crept relentlessly towards the red. With about a centimetre to go till the indicator hit red, I realised that there was this loud bubbling sound coming from the engine, and I was convinced that the thing was going to explode. I pulled over, turned off the engine and decided to walk the rest of the way to church...

I did consider calling my breakdown service, but I would have missed Benediction. Added to which, there weren't any garages open by that time. And I figured that nothing could get fixed in the dark anyway.

Several men have listened, smiled pityingly at the terrified blonde wreck I had become, reassured me that the car wouldn't actually have exploded, and have said that it sounds like the thermostat valve thingy in the radiator has gone. I shall investigate tomorrow... when I've calmed down just a bit... Unfortunately, I can't quite bring myself to believe that it will be quite so simple.

Say a prayer that it won't prove to be too expensive...
Posted by Mulier Fortis on 13.4.12

I hope it is nothing more than a defective thermostat.

Impressed that you abandoned the car rather than miss Benediction! Once upon a time that would be regarded as "normal" Catholicism as distinct from "average", though today, with the lowering of standards and content in modern Catechetics, many will regard it as "Heroic"!

To be completely honest, Father, if I'd been any further away from the church, I'd not have had the luxury of going to Benediction, but would have been forced to wait for the breakdown service to come out to me.

As it was, I was able to pull over to a spot where there weren't any yellow lines and where I knew it would be ok until the next day. Plus I was only 15 mins walk away from the church... so not really that heroic!