Six months to go, and already I'm tired of hearing about the 2012 Olympic Games.

Yes, bah, humbug and all that.

Having said that, I was rather amused to note that the Royal Mint has produced a commemorative set of 50p coins for the occasion. I'm only really interested in one of them - the one designed for girls... 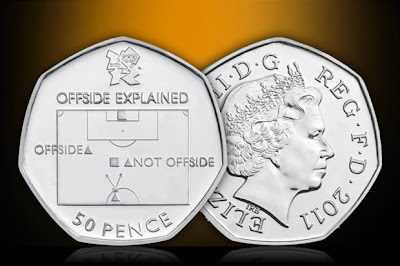 It made me chuckle, and reminded me of this TV advert made a while back for Yorkie chocolate bars.


The chocolate itself was pretty ghastly, actually, being more like the stuff which makes up cheap chocolate coins and Christmas tree decorations. The marketing ploy was brilliant, as was the limited edition "pink" wrapper which followed...
Posted by Mulier Fortis on 1.1.12

Love the photo. I understand offside rules and I am manic about the rules of Cricket. I am very much a female. Does that mean something is wrong with me?

I could discuss the lbw law for ages...

@Supertradmum: you still can't have a Yorkie, though!

That just confirms it: it's not for girls!

Ah, but Father, you have to remember that I am something of a chocolate fanatic... My chocolate hierarchy runs something along the lines of:

Yorkie bars are pretty much at the bottom of the pile. I can't comment on US chocolate as I've never encountered any...