Time For Another Cage Match...? 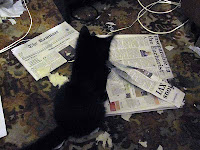 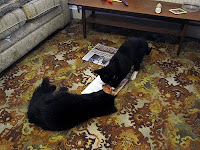 First of all came the epic Trial-by-Kitty of The Remnant versus the Catholic Times. Monsignor Furretti, despite her youth, showed great discernment, and the Remnant survived. Then the Inquisition moved on to consider the case of The Catholic Herald versus The Suppository. A two-kitten panel of Monsignori decided very firmly in favour of shredding the latter... if cats had thumbs they'd probably have arranged an auto da fe, but one works with the tools God has provided.

It has been suggested that perhaps it is time for some further suitable test of orthodoxy for my two hooligans as they enter the cat equivalent of teenagerdom. Any suggestions?
Posted by Mulier Fortis on 8.11.11

For the Orthodox side, how about New Oxford Review (Orthorox) Vs the Universe (I'm told that its hetrodox)

Much like the donkey who bowed to St. Anthony of Padua as he held the Holy Eucharist in the monstrance. God's hand is clearly seen in nature! I am not against eating animals, especially beef,, either.

I am beginning to suspect a fixed match here. Do you put catnip on the liberal papers? (smile)

A transcript of one of the Pope's homilies v, er, one of ours.