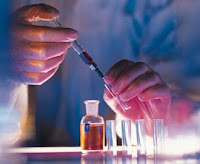 After all the hype and media interest, and all the millions of pounds invested in research which would, apparently, be the answer to prayer for thousands of patients, it has finally dawned on one major research company that human embryonic stem cell therapies don't work, while adult stem cell research is producing the goods.

Of course, that's not quite the way the spin is playing.

Officially, Geron, a California-based company responsible for carrying out the world's first official trial using embryonic stem cells, has decided to pull the plug on the research because of the "current environment of capital scarcity and uncertain economic conditions."

Medical research companies don't "just stop" following particular avenues of research after ploughing millions into it. Not when they get as far as human patient trials.

In other words, despite all the money being poured in, the results aren't forthcoming.

Twitch of the mantilla to Luke Coppen (Editor of the Catholic Herald) who tweeted this one earlier.
Posted by Mulier Fortis on 15.11.11

Scientist 1:Hmmmm........ this isn't working.
Scientist 2: I know! Let's tell them we just don't have the money!
Scientist: Right! Anything for science!

And who knows, someone might give us some more money, which would be a Good Thing...