Is The BBC Biased Against Catholics?

Is the Pope a Catholic? Do bears etc. etc? 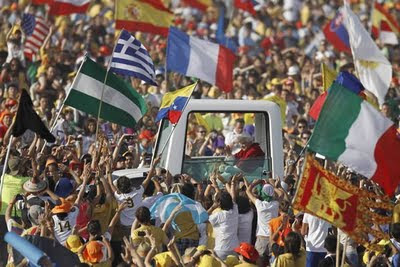 But no, the BBC chose to concentrate on 5000 protestors.

Fr. Ray Blake has a brief summary, as has Bones. The Idle Rambler has a post which goes through the figures, courtesy of Rome Reports.

Annie Elizabeth, of Defénde Nos In Proélio opines that the protestors are all miserable and angry, whereas the pilgrims are filled with joy. Presumably only misery and rage are newsworthy as far as the BBC is concerned.

Milo Yiannopoulos of the Catholic Herald and Damian Thompson of the Telegraph are both of the opinion that the BBC coverage of World Youth Day events in Spain has been disgraceful. Even more surprisingly, even Andrew Brown of the Guardian actually agreed, and that's a telling indictment.

The Reluctant Sinner really exposes the double standards of the BBC in its reporting of World Youth Day (given all of 30 seconds) compared to a piece on an offshoot  of Hare Krishna, namely ISKCON, run by a chap called Richard Slavin. Dare I say that, looking at some of the allegations against Slavin, I can't help wondering what sort of treatment he'd have received if he had been Catholic...

If you want to complain, I suggest you do so here. You might even get a reply. But don't hold your breath.

Twitch of the mantilla to Et Expecto for getting the link to the BBC passed round a few blogs!
Posted by Mulier Fortis on 24.8.11

Compare the BBC's coverage of WYD with their coverage of a Hindu festival:
http://www.bbc.co.uk/news/uk-england-beds-bucks-herts-14605853

Thanks for including me amongst your feast of links :-)

It was very poor coverage (Or lack of coverage) from BBC, I agree.

Shame after they did such a good job with the Papal Visit last year.

Thank goodness for the live streaming on numerous sites. I think I managed to catch most of the major events of WYD.

is there an element of dog-bites-man is not news, but man-bites-dog is news.
So 'Pope says mass' is not news, but 'people protest against Pope' is news. this was evident during the patchy coverage of the papal visit to the UK. One reporter (out of her depth) said 'and there are some protestors with banners further down the road - I'll try to speak to them'........ nothing more happened because when the camera went past you could read the inscriptions that were all about 'Viva etc...' they were not spoken to!
Get a satellite box and you can watch EWTN, or depending on your satellite french, german and polish catholic channels.

I think the BBC gave the game away a few years ago.

The, then, new Head of Religious Affairs at the BBC was a self-declared Atheist.