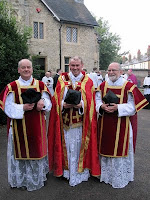 The start of August has been rather busy for me. In addition to the Faith Summer Break (more about that to follow), I also was privileged to attend the 25th. anniversary of Ordination of Fr. Charles Briggs, parish priest of St. Mary's, Chislehurst.

Fr. Briggs chose to celebrate a votive Mass of the Holy Ghost, and borrowed the High Mass set of vestments from Blackfen. It's not often that these exquisite vestments get an outing, so it was quite a treat to see them... and I have to say that they did look rather good in the setting of St. Mary's, which is a beautiful church... 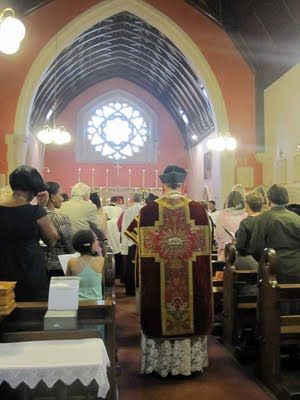 I'm afraid that I threatened Chislehurst's MC with a painful and lingering death should any of the vestments go missing, and he appears to have taken me seriously, because they all came back safely. We even appear to have acquired an extra corporal...

I was delighted to get the chance to meet up with Fr. Ray Blake again. He kindly agreed to pose for the blog along with Fr. Nicholas Schofield and Fr. Marcus Holden... 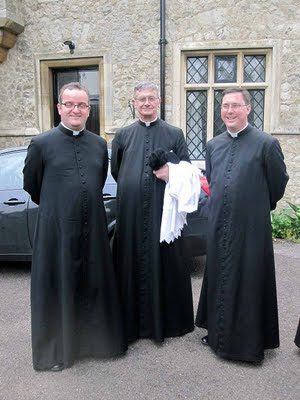 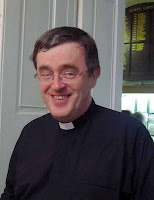 It was also a real treat to meet Fr. Michael Brown, of Forest Murmurs fame. Fr. Charles seems to get mentioned regularly on Fr. Brown's blog, so it was nice to put a face to the name at long last.

The reception afterwards was held at Chislehurst Golf Club - the parish priest of Chislehurst is always a member of the Golf Club because it was formerly the home of the Emperor Louis Napoleon III and the Empress Eugenie - the Emperor was buried in St. Mary's before the Empress carted him off to Farnborough Abbey in a fit of pique. It's just such a shame that Fr. Briggs doesn't play golf! 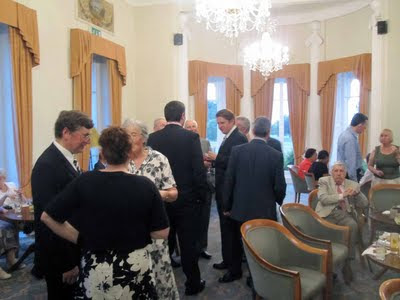 Archbishop Emeritus of Southwark, Kevin McDonald, preached the sermon at the Mass. It was good to see that he looked so much better after all the health problems he had... 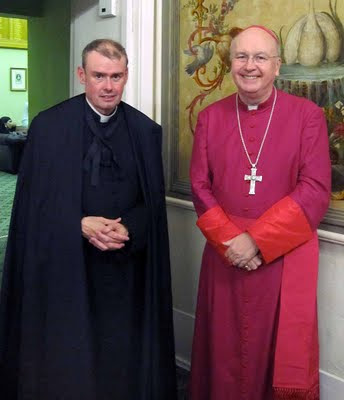 There are one or two photos on the Southwark Diocese website - unfortunately you have to scroll down to find them, because the different entries don't have separate links. More of the photos can be seen on my Flickr page.