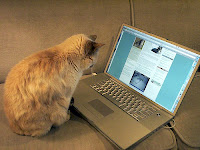 Before you protest that I frequently seem to say I'll stop blogging in a passive-aggressive attempt to elicit sympathy, I'd just like to make it clear that this isn't an attempt to gain sympathy and I am not going to stop blogging.

Mind you, my blogging has been so irregular of late that I doubt anyone would notice if I had stopped... (Note to male readers* - that was your cue to comment in the com-box that yes, you had noticed my absence, and yes, you were concerned, but you had decided to be understanding and let me have some space in which to recharge my blogging batteries... please also note that a failure to make such comments will result in me sulking, in as conspicuous a manner as I can manage on my blog... and probably on a few other blogs as well...)

Seriously, I just ran out of blogging steam.

I might take another week or so off, to allow time to stoke the boilers... (Another note to male readers: that was your cue to comment in the com-box that you hope I won't be gone too long...)

* Just in case you were wondering, female readers know instinctively when (and how) to answer this sort of cri de coeur, even if they choose not to do so. In the five years I've been blogging, I've found that men often just need the little pointers as to when such comments** are expected...

** Boxes of chocolates (real, not virtual) are an acceptable substitute for comments (real and virtual).
Posted by Mulier Fortis on 1.7.11

I'm sorry, this male reading wasn't paying attention, could you repeat what you just said?

Honestly though, I have been the same way, summer in Alaska is so crazy there are some weeks where I just disappear for a while, so take a break, and then come back with a vengeance!

Yes, I had noticed your absence, and yes, I were concerned, but I had decided to be understanding and let you have some space in which to recharge your blogging batteries. Don't be gone too long. (Seriously, I know what you mean.)

facebook makes all bloggers run out of steam. At least that is what has happened with me....God bless.

Maybe I should find some time this Summer to come and visit you. We'd get up to so much trouble that you'd have blog fodder for a month afterwards :)

Have a break from blogging if you must but don't stay away for too long, please.

I hope it was all right to add my comment, being female and all! :-)

But I always think of you as one of the most dynamic, original bloggers that never runs out of steam, despite you saying otherwise. Praying to St Anthony to 'find' the inspiration to blog always helps me. As does a good dose of Fawlty Towers or Seinfeld. The comedy just seems to revive me.

This is a good one - but keep yours going! I always read it even if I don't comment much.

Mac, I did notice your quiet phase, but I put it down to post-GCSE angst.
You've got the little dears as far as the exam (but did they revise.....) now you must hold your breath for the results...