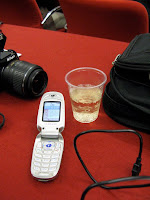 I tried very hard to follow the Vatican's Blogger Bash on Monday, via the official livestream video, and then via SQPN's livestream... as the saying at the Vatican apparently goes, "Yesterday's technology tomorrow!" The audio and video kept cutting out, only cutting back in when there was a round of applause... I did manage to get a few screenshots, which I'll try and add tomorrow. Interestingly, the connection actually appeared to improve when someone went into the corridor and filmed the participants chatting to each other... probably this improvement was in part due to all the bloggers stopping their blogging, tweeting and facebooking to get themselves some well-deserved fizzy stuff.

Fr. Tim has put up a very good summary of the whole thing.

I had originally intended to join in with today's more relaxed blognic, forgetting that, unfortunately, the Tuesday after the Bank holiday is a work day. Bummer. By the time I got home, the blognic was probably over, but, to be honest, I fell asleep on the sofa and forgot to Skype...