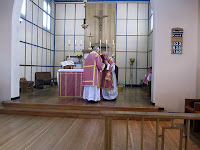 I don't speak Latin. I know little bits and pieces from the Mass (for many years the only Latin I knew was "Kyrie, eleison!" ...the rest was all Greek to me...) and from singing stuff like Mozart's Ave verum. I've come to recognise quite a bit from the Psalms because I typed out the Rossini Propers for the choir to use at the Extraordinary Form Mass.

But I don't really know any Latin.
I do know several people who do know Latin, and know it extremely well. And they have assured me that the current ICEL translations we use at Mass are dreadful. In addition, through my reading of the writings of many of the saints of the Church, I had come to the conclusion that even the translation of the Scriptures left much to be desired. I also picked up the discrepancies in translation through praying the Divine Office, first using the standard English texts (ICEL again) and then looking at the English translations given in the Benedictine Monastic Diurnal.
I wrote a post on it way back in 2007, explaining how some of the differences in translation had really major effects on the meaning.
Today, at Mass, the discrepancies in translation hit me like a thunderbolt. Like most Catholics who attend Mass regularly, I am very familiar with the account of the feeding of the five thousand as recorded in St. John's Gospel. So familiar, in fact, that occasionally I don't listen to it all that carefully any more. However, the translation used at the Extraordinary Form Mass is rather different to the Jerusalem Bible translation used in the Novus Ordo lectionary.
Fr. Tim read the Gospel in English before his sermon, as usual. All of a sudden, one verse jumped out at me: "And when they were filled, he said to his disciples: Gather up the fragments that remain, lest they be lost." (John 6:12) But this is currently translated as "When they had eaten enough he said to the disciples, 'Pick up the pieces left over, so that nothing gets wasted.'"

The thought which hit me so suddenly was that the ICEL translation in the Jerusalem Bible has completely twisted the meaning of the text, separating it from the Eucharistic overtones and making it into little more than a picnic meal, where you don't want to let food go to waste. The Douay-Rheims translation, on the other hand, with its use of the words "fragments" and "lost" brings out the parallel with the Sacrifice of the Mass - reflecting the care the priest takes when ensuring that no fragment of the Host is allowed to fall from the paten, and the care with which the corporal should be treated, being placed for protection in a burse, and being rinsed in water which is poured into the ground before being washed with other items. "Fragment" implies tiny particles as well as bigger ones, "pieces" makes you think of chunks of bread.
This is probably not news at all to the majority of my readers, but, as I said, I haven't had the luxury of reading and translating the original Latin for myself. It makes me even more keen to see the introduction of the new, corrected translation of the Mass.
Posted by Mulier Fortis on 3.4.11

A while back I was startled to hear the reading at Mass from the Book of Daniel: "And I saw one like a human being...." I'm in a small parish with no ardent feminists, but I wondered if I'd heard aright so I went and checked, and sure enough that's what the text said. That really messes up the meaning. Jesus often used that phrase from Daniel and called himself "the son of man". He didn't call himself "the human being". It's hard not to be irritated, but no one else seems to notice or be bothered by these things. (Which is even more irritating).

Words are important. I know nothing of Latin but am a reader by nature and majored in English. I don't particularly like the language used in the translation I hear at Mass and have a Douay-Rheims Bible. I much prefer its language and love that it's only a few translations from the original.

"Kyrie, eleison!" IS Greek, actually. The Latin translation would be "Dominine, miserere!"

It isn't just the translations of the Latin that are bad. Comparing the New Testament readings in the Missal with the original Greek can sometimes be a bit of an eye-opener. The fact the translators felt free to take so much licence when it came to translating the actual Greek text written by St Paul is, to say the least, a cause for concern.

The Missal has been re-translated, but aren't we still stuck with the same lousy lectionary? Something needs to be done about that, too. And, while they're at it, the breviary.

Although: I'd far rather we JUST STUCK TO THE LATIN.

Sorry, Mac! My mother was a blonde. I'm afraid some of her blondness has rubbed off on me. I do, however, get your blonde jokes! :-)

Never liked the Jerusalem Bible. Too damn 'French.' My New American Bible (which is used for Sunday Mass in the US] renders it: 'When they had had their fill, He said to His disciples, "Gather the fragments left over so that nothing shall be wasted."

GOTO - I still think that there is a depth of meaning in "lost" compared to "wasted."