The Latest Cure At Lourdes... 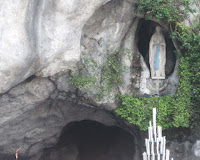 Serge François has been reported as experiencing a "remarkable" healing of his herniated leg when he was praying at the Grotto at Lourdes in 2002. He said that he felt a warm glow in his leg, and all of his suffering suddenly disappeared. Now he has walked the pilgrimage route between France and Spain, the Camino de Santiago de Compostela.

I'm not quite sure why no-one has called it a miraculous cure. I thought that it might be something to do with the condition - a Google search of herniated legs brought up lots of references to sciatica and herniated discs leading to back and leg pain, but not much on what a herniated leg actually is.

Nevertheless, the 20 doctors who have examined his case have concluded that the healing was certainly remarkable - they haven't said "Oh, it just got better spontaneously!" or come up with any explanation. Contrary to popular belief, the Catholic Church doesn't go round calling just anything a miracle, and the Medical Bureau at Lourdes is particularly careful - of more than 7000 unexplained healings at Lourdes, only 67 have been recognised as miracles.

I'm sure that Serge François isn't too worried about whether his healing is officially recognised as a miracle... and it sounds pretty miraculous to me too!
Posted by Mulier Fortis on 30.3.11