Curiosities Of The Natural World... 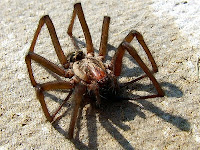 I was setting things up for a special evening Mass this evening (in honour of St. Patrick) and, while putting the bell in a suitable spot for the server to ring at the appropriate moments, I spotted what looked like a large, dead spider on the sanctuary step. (Not the one in the picture, I hasten to add... that one was just from Google, for illustrative purposes, but it looked pretty similar...)

I'm not terribly squeamish when it comes to spiders, but I don't particularly want to get up close and personal, and so, putting the bell down carefully beside the spider, I mentally noted that I should get some tissue paper and remove the deceased invertebrate as soon as I had finished setting stuff up.

However, although the spirit was willing, and the flesh wasn't particularly averse to careful arachnid disposal, my brain was absent without official leave, and I completely forgot...

...until the start of Mass. As the server, deacon and celebrant approached the sanctuary, I looked over to where the bell was positioned... and discovered that no spider was anywhere to be seen...

Does anyone know if spiders "play possum"?
Posted by Mulier Fortis on 17.3.11

Please, dear Mac, have a thought for those of us who read your blog regularly but have a horror of s*****s! No more pictures of them - please! At least, not without a warning first.

Mmmmmmm. Lip-smacking, crunchy spiders, particularly good with deep-fried courgette flowers.
I think spiders do play possum but usually they retract their legs so they look like a black blob (that's the scuttling house ones).
If it was a dead spider or a spider skin it's likely the slightest draught would blow it away.
Did anyone look inside the bell?

It was alive and well on Tuesday behind the organ...

Have ever wondered why your town is called 'BlackFEN'? I bet that's a raft or a wolf spider, straight off the fenland. Uggggghhh.

I have it on good authority that certain arachnids have an enzyme which allows a "cloaking" function in the epidermis akin to the attribute of chameleons. The spider in any case had not moved, but only become invisible. It is quite a feat of adaptation, really.