Consecration Through Mary To Jesus... 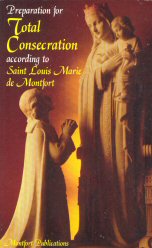 About four years ago, I renewed my Consecration to Mary according to the method given by St. Louis de Montfort.

Not to be undertaken lightly, there are 12 days of preparation before the actual preparation begins, followed by a further three weeks. It was supposed to be an annual thing for me, but, while the spirit is willing, the flesh basically suffers from a combination of inertia and amnesia.

The Good Counsel Network is doing its best to encourage more people to make the Consecration this year. If we start tomorrow (20th February) then the day of Consecration is March 25th, which is, of course, the Feast of the Annunciation. There's nothing like doing things together as a group to help with motivation and perseverance...

Twitch of the mantilla to the Ecumenical Diablogger for highlighting the campaign!
Posted by Mulier Fortis on 19.2.11