John Paul II To Be Beatified... 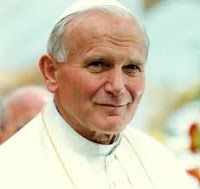 After the death of Pope John Paul II, there were many calls for him to be canonised immediately. Although Pope Benedict waived the five-year rule, things seemed to have gone very quiet. And now it has been announced that the miracle needed for Pope John Paul II's beatification has been approved, and the ceremony will take place on May 1, 2011, which happens to be Divine Mercy Sunday.

Fr. Ray Blake speculated that John Paul II's body would be transferred to the Chapel of St. Sebastian in St. Peter's, and, according to Rome Reports, this has been confirmed. Fr. Z has an excellent post about the speed of the beatification process, and why some people seem to get fast-tracked to sainthood. And the Catholic Herald (the only British Catholic newspaper worth reading, in my humble opinion - and I thought that even before they asked me to write an article for their Christmas supplement!) has a feature on the French nun whose healing from Parkinson's disease at the intercession of Pope John Paul II provided the miracle needed for the process of beatification to continue.

May 1st also happens to be the pseudo-festival of Joe Communist. How ironic that the man who fought his whole life for the suppression of that pernicious ideology is going to be beatified on a feast day made up by Pius XII in deference to it...

That's not entirely fair to Pope Pius XII, Patricius. My understanding was that the Feast of St Joseph the Worker was established to give Catholic workers something to celebrate on the 1st of May other than May Day.

Apart from the undoubted joy and excitement of the announcement of the beatification of Pope John Paul, I hope an ancillary benefit will be that the crypt of St. Peter's will now revert to normal, so that we can once again go and pray at the tomb of Pope Pius XII. Time to concentrate on his beatification next....

That's right—Pius was a staunch anticommunist who wanted to stress the Christian dimension of labor and hoped that the Feast of Saint Joseph the Worker would draw attention to the Church's social teaching, which has been critical of the exploitation of workers under both communism and capitalism.

John XXIII's Prayer for Workers (http://catholicism.about.com/od/prayers/qt/Prayer_Workers.htm) captures the meaning of the feast quite well.