Time For A Blonde Joke... 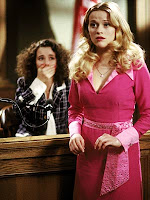 I have been posting so much about cats of late that I have neglected the other thing for which my blog is famous... namely, blonde jokes.

A blonde and a redhead went to the bar after work for a drink, and sat on stools watching the 6 o'clock news. A man was shown threatening to jump from the Brooklyn Bridge, and the blonde turned to the redhead and said, "He's just seeking attention. I bet you $50 that he won't jump."

The redhead looked at the blonde, grinned, and agreed

As they continued to watch, the man jumped, so the blonde gave the redhead $50. The redhead, after a moment's hesitation, gave back the money, saying, "I can't take this, you're my friend."

But the blonde insisted, "No. A bet's a bet. You won fair and square. Take the money."

Then the redhead said, "Listen, I have to tell you that I knew he'd jump. I saw this on the 5 o'clock news, so I can't take your money."

Brilliant, and new, at least to me.