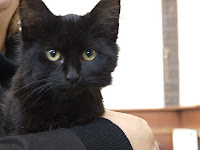 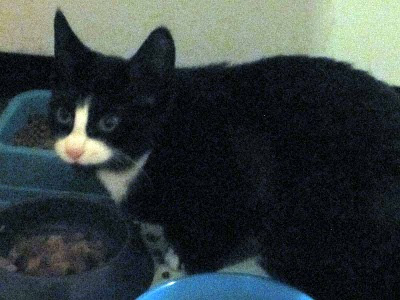 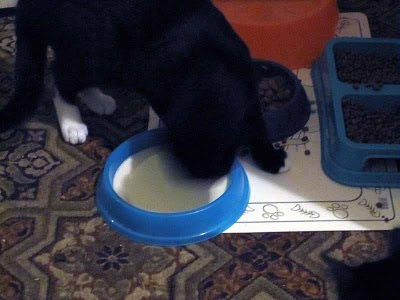 She looks absolutely gorgeous. Wishing you years of pleasure and hope the settling in goes to plan. :-)

I like Monsignor Guido Miaowrini. At least their names will get along: Msgr. Furretti and Msgr. Miaowrini.

She's a little sweetheart. Mgr Guido Miaowrini is an inspired choice and it gives them exactly the same status.
I suspect Furretti's nose is a bit out of joint with the newcomer taking away some of your attention.
Was your new kitten part of a litter born at the rescue centre or has she been in a litter of badly-treated or abandoned cats?
No doubt things will settle once Furretti establishes she's top cat.
PS Have you thought of setting up a separate kitty blog?

She should get on well with Basil (Loftus).

In the early 18th century there was a Cardinal Portoghese (Cardinal Paw-toghese?) who, appropriately for a cat-themed cardinal, was in the habit of giving other cardinals gifts of exotic birds which were trained to sing in chorus (and, indeed, in parts).

Clearly Mgr F. thinks she should be called 'Cardinal Grotti'...

(Though one has to have been a reader of the Catholic Herald of some years back to get that one.)

Genty - once the cats have settled, I shall reduce the cat-posts to occasional cameo roles. I've only been writing so much about cats because their exploits have featured rather heavily in my life of late!

Oh-er, that's the opposite of what I meant. I want more!!! Thus I was sitting comfortably and inviting you to double your blog workload.
Mea culpa.

Mac: Let them get used to each other. If there is a way to keep them seperated and introduce them to each other gradually and/or allow them together ONLY when you are around that is best. They will continue to spar for dominance (but usually the first cat in residence wins) but it's worse at first. It will get better!

I agree with Sue - Cardinal Grotti!