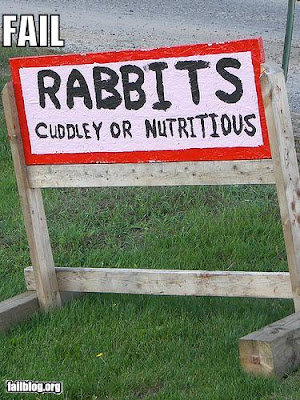 I like this picture. It's not a fail at all, according to my way of thinking. It helps to fight against the tendency of the media to portray animals are as cute and cuddly, and nothing to do with food.
I have often found myself staring in disbelief at children who do not realise that all our food is either from animals or plants. I still recall the lesson where, after I had made this assertion, one Year 11 class (that's 15 - 16 years old) proceeded to name a succession of different foodstuffs in an attempt to catch me out...

"Cornflakes?"
"Comes from maize, also called corn. It's a plant."
"Ummm... ok, toast?"
"Toast is made from bread, bread is made from flour, flour is made from wheat. Wheat is a plant."
"Aha! Tomato ketchup! That's not made from plants or animals!!"
"And, what does tomato ketchup contain, then...?"
"Tomatoes, of course... oh, yeah... tomatoes are, yeah... Well, what about spaghetti?"
I was soooooo tempted to say that spaghetti grew on spaghetti trees...
Posted by Mulier Fortis on 31.8.10

Ah ! But what about Treacle ? You can't argue that that's animal or vegetable . . . whoever heard of you mining for either of those ?

Ahhhh... you obviously never heard of the fabled sugar mines...

You could consider it a FAIL because they are indeed both cuddly AND nutritious. That and they spelled cuddly wrong.

Me, I like the Bad Catholic's Guide to Wine, Whiskey, and Song's recipe for Easter, Rabbit Fricassee.