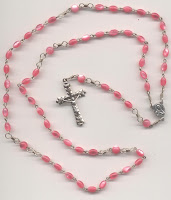 I haven't seen a meme for ages, not counting that one over on Bara Brith, so I decided to start one of my own.

The rules, which need to be posted: Name your three most favourite prayers, and explain why they're your favourites. Then tag five bloggers - give them a link, and then go and tell them they have been tagged. Finally, tell the person who tagged you that you've completed the meme... The Liturgy and the Sacraments are off limits here. I'm more interested in people's favourite devotional prayers.

First prayer choice for me is the Hail Mary - particularly the bit that asks for prayers at the two times we need them most: now and at the hour of our death.

I found myself praying that prayer particularly fervently as I spun round on the motorway after being hit by an articulated lorry... It occurred to me that I wasn't praying to be saved from the accident (which, as it so happens, I was) but rather I wanted Our Lady to be there as I died. After all, one doesn't normally expect to survive turning upside-down on a motorway in the morning rush-hour when one is in a tiny little car. I still don't know which side of the crash barrier I ended up on. I just know that I closed all six lanes of the motorway, both directions... and it took the fire brigade over 45 minutes to cut me out of the wreckage.

My third prayer is the Stations of the Cross - the version by St. Alphonsus, that is. I am not a fan of the modern versions of the Stations which focus on how "some people" are guilty of various sins... usually with a social justice or environmentally friendly slant. "We pray for those who..." is a phrase which annoys me, in what should be a reflection on what I, personally, have done to offend God, and what I, personally, need to address.

Now, limiting myself to five tags will be difficult, but I want to leave plenty of scope for everyone else. I always hate trying to find someone to tag only to discover they've been tagged already... here goes...

First, I shall plump for Leutgeb over at Bara Brith, as she got me thinking about memes in the first place, so it's sort of her fault. Second, I shall pick Dominic Mary from Libera Me, as he's probably at a bit of a loose end now that the elephants have gone. Third is Clare from Battlements of Rubies, for no particular reason other than I'm interested. Fourth blogger is actually a cheat - Joe and Brian from Defend Us In Battle... whichever one of them answers first. Fifth tag goes to Paulinus, In Hoc Signo Vinces, because he used to do lots of memes...

Of course, if you can't wait to see if someone will tag you, you can tag yourself, and mention it in the com-box!
Posted by Mulier Fortis on 19.7.10

Yes, well . . . the remaining elephants (of which there are many) are readying themselves for the move of my office, which is just beginning; and I have to submit the last essay of my Master's course by Friday . . . so, as you say, I'm at a bit of a loose end, and am thus most grateful to you for helping me fill it !

However, it's all done, and I shall await the followup with some interest !

Most interesting Post, Mac. I love the Litanies, including: Litany Of Our Lady Of Sorrows (composed by His Holiness Pope Pius VII in 1809 during his captivity by Napoleon); Litany Of Loretto; Litany Of The Holy Guardian Angel. [Lots of Litanies over at http://www.catholicdoors.com/prayers/litanies.htm]

Thank you for starting this meme!

I really like the prayer to St Michael, too!

Funny. A comment that I thought I left here hasn't shown up. I have a feeling I wandered off before hitting 'publish'.
Thanks for tagging me on this, it's a nice neat and tidy meme, not too onerous and I'm interested to see what prayers people choose.

I notice that quite a few of the bloggers I would have tagged have already been tagged by others and put their posts up.
I'm a bit slow off the mark.
I'd better hurry up or there will be no one left to tag!

Could you please kindly explain what a meme actually is?

. . . And how it's pronounced, please ? Is it "meme" to rhyme with "phlegm" or is it " me me" to rhyme with "REME" [ Royal Electrical and Mechanical Engineers (British Army) ]. Is it a French word ? And, has Sylvester been tagged ?

If I recall correctly, a meme is a philosophical term.

In blog-speak, it is an instrument of torture whereby one gets other bloggers to reveal aspects of themselves, and to allow bloggers to raise their own profiles by generating lots of links.

I believe it is pronounced "meme" to rhyme with "steam"...

But feel free to correct me on any of these points...

Tagged by the Catholic Teuchtar...

Every Orthodox Christian will associate the Prayer of St Ephraim especially with Lent, but it's extraordinarily powerful and lifechanging at any time. Here's Fr Alexander Schmemann on this prayer:

I think "meme" is a "me theme" but I don't know where I heard that, I might have just made that up.

At long last I've posted my meme. It's busy round these parts over the holidays with children coming and going.
It's been fun reading other peoples posts.