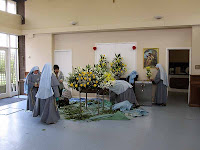 The Day With Mary team visits Blackfen on an annual basis. It is a tremendous blessing to have them in the parish - the enthusiasm, the joy, the devotion, the prayer... it's a real spiritual powerhouse! At the beginning of the day, I spotted the Franciscan Sisters of the Immaculate preparing the bier for Our Lady's statue. 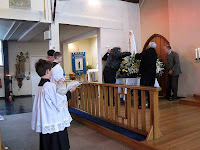 The Church's teaching on indulgences was explained at the start, and we were encouraged to offer up what we could for the benefit of the Holy Souls in Purgatory. In the middle of the day there were three priests hearing Confessions, each with a sizeable queue! So I have no doubt that quite a few Holy Souls got "sprung" as a result! 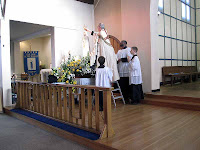 Our Lady's statue was carried in, and candles and lights arranged; then prayers were recited and a hymn or two sung before the statue was crowned... I am always amazed that Fr. Tim actually manages to climb the stepladder while wearing a cope, cassock and cotta... let alone that he crowns the statue and arranges the rosary without falling into the flowers! 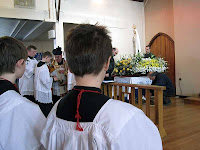 More prayers followed, and then the statue was carried round the block in procession, while the Joyful Mysteries of the Rosary were recited. After taking a quick photo or two, I returned to the warmth of the church... It is strange, but we've always been very lucky with the weather. Even though the Day With Mary is in February each year, I don't remember it ever having rained for either the Rosary Procession or the Blessed Sacrament Procession. Today was no exception: it actually snowed later on in the day, very lightly, but the processions were unaffected! 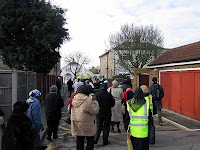 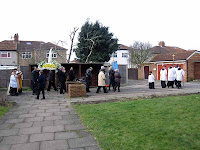 Then it was back for Mass, in the Extraordinary Form, which was well attended. 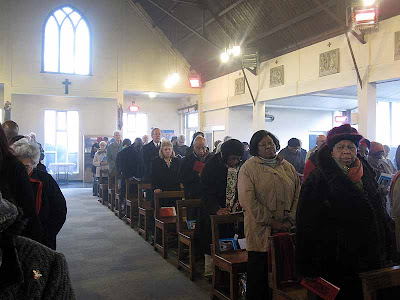 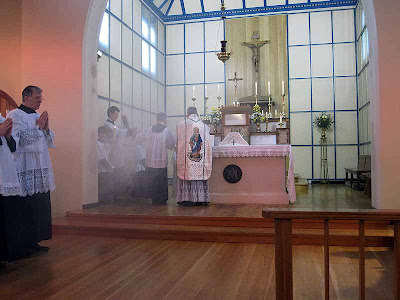 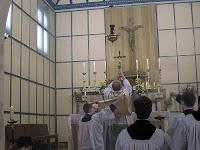 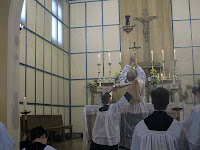 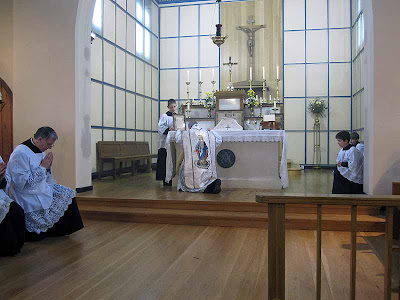 After Mass, we stopped for lunch, and I made my now customary bee-line for the book stall. I was so keen to check out the books that I forgot to take a photo of them. I'll do a separate post detailing my purchases... suffice it to say that the chaps in charge of the book stall remembered me!
After lunch, it was back to the church for Exposition. The Blessed Sacrament Procession only went round the car park due to time constraints, but I repeated my earlier tactic of taking a quick photo and then retreating back to the warm church. Yes, I'm a wimp. 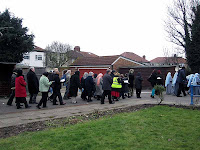 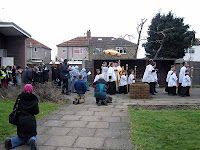 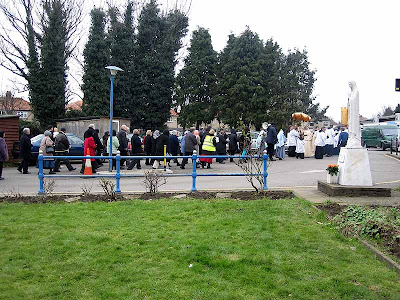 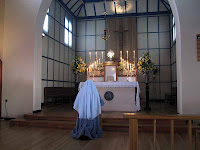 Fr. Tim gave an excellent sermon on Our Lady - with any luck he'll put the text up on his blog later. We then recited the Luminous Mysteries of the Rosary, led by one of the Sisters, followed by the Stations of the Cross (with hymns and prayers in between!) My one regret was that I wasn't able to join in the singing, as it made me croak.

The croaking was soon sorted, though, with a couple of cups of tea, and a little look at the devotional objects on sale. I had hoped to get a replacement statue of St. Philomena, but alas, someone else had already snaffled the one the team had brought along.
My attention was caught, however, by a rather good bust of Our Lord crowned with thorns: coming so swiftly after Fr. Tim's reference (in his sermon, and a few days before on his blog) to devotion to the Sacred Head of Our Lord, it seemed just perfect. 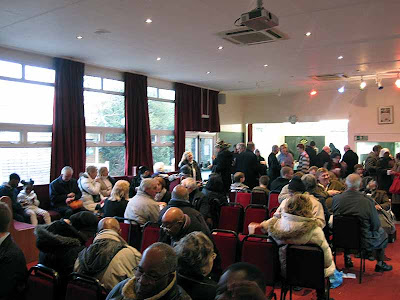 The final session followed on, with Fr. Agnellus, FI, giving a hard-hitting sermon on doing everything we possibly could to avoid hell, and turning to Our Lady for her assistance. Plenty of food for thought, and a real challenge against lukewarmness or complacency. 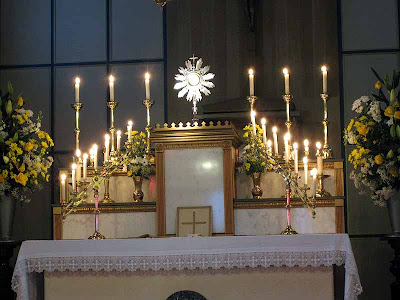 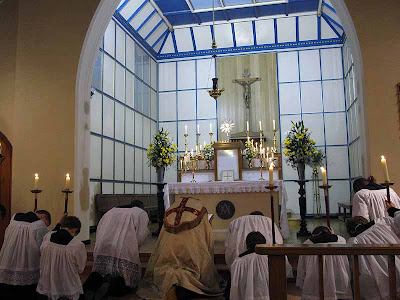 We then had Benediction, which was very moving. I thought I'd give a little flavour of the atmosphere and the enthusiastic response of the congregation by recording a snippet from the recitation of the Divine Praises and the singing of Adoremus in aeternum as the Blessed Sacrament was reposed in the tabernacle...
Waving goodbye to the statue at the end of the day, to the hymn "O Fatima, farewell !" always brings a tear to my eye... and watching a little toddler wave a white hankie, while being carried in her father's arms, nearly finished me off completely... 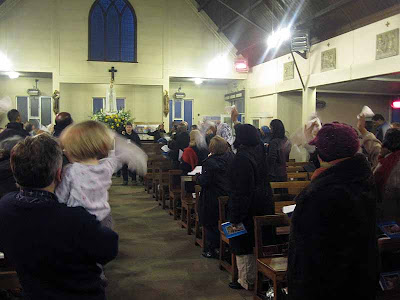 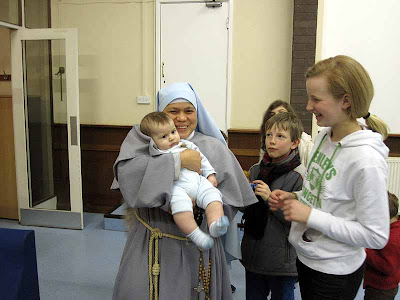 The day has been a real blessing for the parish. I can't wait until next year!
Posted by Mulier Fortis on 14.2.10

Sounds like a lovely day and very pleased to hear you're on the mend. I've missed your posts recently.

We were so hoping to be there, but babysitting duties of our grand children took over. We were so sad to miss it but we will compensate by attending a Papal Audience on Wednesday and popping into every church we pass in Rome. Hard Life LOL x
Nothing will stop us next year, I love the Procession around the back streets.

Ditto to what I said below about the Dinner : another Blackfen example for all those who say that Parish Life is dead !

A joyful account of an occasion that no doubt brought many graces to Blackfen.What a continuing blessing you good folk have in Father Tim. Are there "any more at home like"him? If there were...Australia calls!

How beautiful!
Loving our Lady in the worship of Her Son.
May the graces of this wondrous event reach out to all the world; especially those who are so far from God.
Blessings in your Lent, Mulier!