This is a very girly blog post. If you are a man, I expect you to read the first four paragraphs (including this one) and then skip straight to the comments to leave a message of sympathy. If you happen to see the photos as you skip past, comments of admiration or commiseration* (depending on your point of view) may also be left. *Please be aware that if your comments are less than appreciative, I will hunt you down...
I haven't blogged since Tuesday - I've been ill with a nasty chest infection which has seen me curled up in bed with only my iPhone to remind me that there was a world outside my bedroom.
Today I realised that I had to bite the bullet and get myself to the doctor. I'd hoped it could be avoided, because there weren't any appointments available for the next two weeks, but after yet another sleepless night spent coughing my lungs out, I decided to try my luck with the "sit and wait" option.
Three and a half hours later, I left the surgery clutching a prescription. One visit to the chemist later, and I was ready for a nap, much to Sylvester's disgust: as far as he is concerned, my bed is his domain during the hours of daylight.
(Ok, men can skip to the end...)
In the evening, I woke up again, and remembered that I was due to have my hair done.
Now I have been battling to get my "ideal" blonde colour for some time; although I have liked the result, repeated applications of the same peroxide-based tint have gradually resulted in the shade becoming too light for my colouring... I do not wish to end up a platinum blonde!
So, I told my hairdresser that I wanted to go a shade or two darker. This caused some consternation... apparently, all the peroxide used previously would interact with my preferred new shade and go green... and I didn't like any of the more "honey and gold" options.
After a prolonged pow-wow among all the hairdressers in the salon (with me as the centre of attention, clutching a book of hair samples) it was suggested that I try to grow out the peroxide completely, prior to trying a slightly darker ash blonde shade, while disguising the growing-out roots with careful application of low-lights in a colour similar to my natural shade. I was a little dubious at first - dark roots look awful, and they'd be pretty obvious for about a year while my hair grew out - but then agreed to give it a go.
I expected to find that my hair was light blonde with darker blonde low-lights. In fact, it seems that the result has been more dark blonde with lighter blonde high-lights... and the roots have been completely disguised... 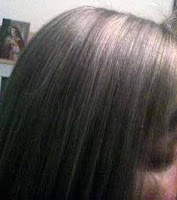 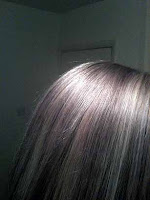 I'm glad that you're well enough to be up and about and get your hair done! And don't feel too girly about this - I find half an hour in the barber's chair a great pick-me-up, so the two to three hours ladies seem to need must be exceedingly therapeutic.

Firstly, sorry to hear that your 'nasty cough' developed into something far worse.

Good job you had your iPhone for company! You must be VERY good friends by now! :0)

It's difficult to get a good impression of your new hair colour with just a partial head shot but first impressions are definitely favourable - dashed clever these hairdressers, what! You certainly can't see any dreaded roots.

You hair is lovely - they did a great job. I also had the chest infection thing - my breathing was so shallow I got really light-headed. I hate to tell you this - but the next schoolborne infection coming to a classroom doorknob near you is......well, let's just say to go for the bogof offer that Morrisons has on Andrex this week.And when you are back at school, and a Year Nine asks to go to the toilet in the middle of the lesson - don't argue.