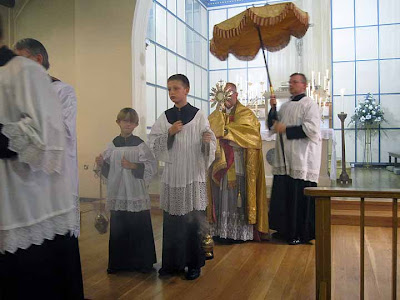 Ok, ok... I just couldn't resist posting a few photos... I managed to finish slightly early (I didn't get given a cover lesson) and took the opportunity to scoot home and have something to eat before I head out to the church for Round 2. 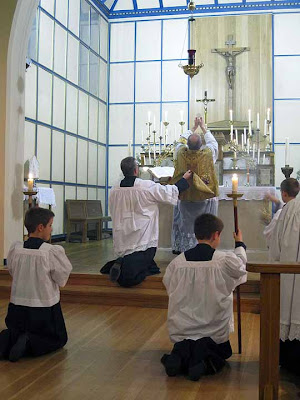 The Mass at the start of the Forty Hours was a Missa Cantata in honour of the Blessed Sacrament, and members of our regular visiting schola came and sang. 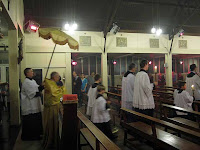 The Mass was very well-attended, and the Procession around the church nearly reduced me to tears, especially when the front end of the Procession had to wait for the back end to pass before returning to the Sanctuary.
Rather like the throngs of people who showed up to see the relics of St. Thérèse, this demonstrated for me the grassroots of Catholic devotion. This sort of thing would have been considered commonplace at one time, just one of those things Catholics took for granted as part and parcel of their Faith. Please God, the Bishops of England and Wales will realise that holding countless consultation meetings to discuss the future of the Church isn't going to get people to attend, but putting on the traditional Catholic devotions, such as Benediction, the Rosary, the Quarant'Ore, and so on, is.
We had many more than the stipulated minimum twenty candles, and, after Mass, a couple of candle stands were moved to the front of the Sanctuary. 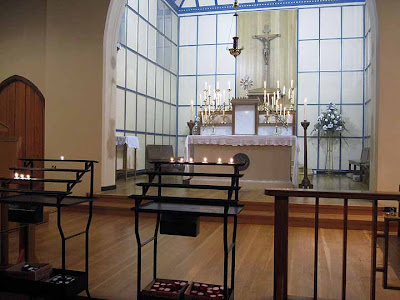 I popped into the Parish Club for a couple of quick coca colas (I needed the caffeine content) before going back to the church to spend a little more time in prayer. The atmosphere was awesome, and I really didn't want to leave... but I knew that I had a busy day at school scheduled, and so left at about 12:30am. 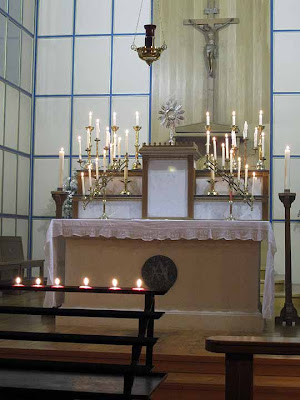 Thank you again. Even the photos brought tears to my eyes. How wonderful to be where you can be a part of this. We, alas, are a minority in the hinterlands of the "Bible Belt" of the United States. -- Rosemary