Just in case you've been stuck in Outer Mongolia without any internet connections, yesterday saw the Silver Jubilee of Fr. Tim Finigan's Ordination to the Priesthood. 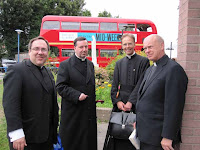 A few people have blogged about it already: the indomitable and utterly charming Fr. Z (on the far left of this photo) managed to get a post up - he was spotted taking sneaky (sorry, did I say sneaky? I meant to say discreet...) photos from his pew, and I'm not in any way put out by the fact that he had a better angle for his photos, or that he was closer. No, not a bit. I will be happy to accept a link from him by way of assuaging my hurt feelings, but, no, I'm not put out, much... 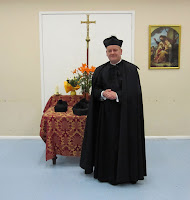 His Hermeneuticalness has posted as well, probably just the first of many; I suppose I should allow him the scoop, since it was his Jubilee, after all... and his photos are pretty good, but would have been better if I'd taken them, as I was sitting in a better position than Carl... (Hah!) ...though I will be happy to accept a link from His Hermeneuticalness in order to assuage any hurt feelings because he's got better photos by virtue of having a better camera (well, it has more buttons on it...)
Fr. Michael Clifton, better known as Fr. Mildew, has a piece on the Jubilee celebrations, and I get several honourable mentions, though, sadly, no links... I also see that I'm not on Fr. Mildew's Blogroll: this is surely an oversight... However, in un-curmudgeonly fashion, Fr. Mildew did consent to pose for a photo with Fr. Blake, seen here outside the marquee after Mass. 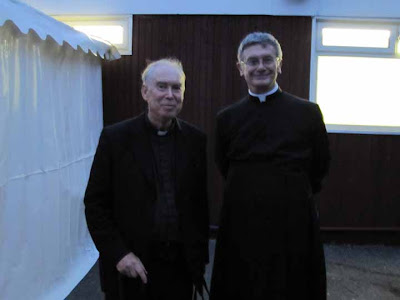 Fr. Ray Blake, Blogger and Parish Priest of St. Mary Magdalen's, Brighton, is even more charming than Fr. Z, if that is possible: imagine Fr. Z with a British upper-class accent and an air of insouciance, and you've got it, well, sort of... 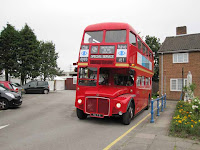 The arrival of members of the visiting schola and a few others by a Routemaster bus caused a bit of a stir, not least among our youngest altar servers, who promptly took the opportunity to explore it. The Routemaster bus, so beloved by tourists as "typically British" is, sadly, rarely seen on the streets of London any more... due to a combination of health and safety concerns that people couldn't be trusted to get on and off the open-backed buses and cost-cutting measures which resulted in the introduction of driver-operated buses. 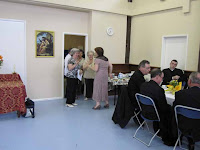 Before Mass, the UCM had arranged tea and coffee for those who had travelled some distance to get to Blackfen. The choir were having a brief last-minute run-through in the small hall, while the visiting schola did their warm-up in the cry chapel. I had a brief chance to greet a few priests I know, and then I returned to the church in order to prepare for Mass (and to make sure I got a good spot for taking photos!) The church had been re-ordered somewhat in order to accommodate the visiting clergy, and the choir sat at the side, but facing across the nave, an arrangement which seemed to work very well. 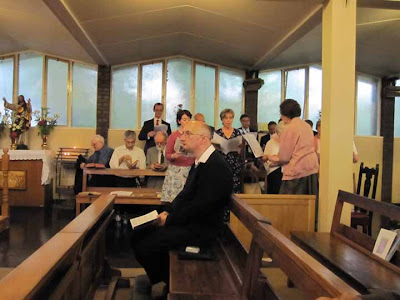 And then there was the Mass: well, what can I say? Dr. Alcuin Reid afterwards said to me that our servers were the best-trained he'd ever seen in a parish setting, which, coming from one of the foremost liturgical experts in the country, if not the world, is high praise indeed. There were about thirty clerics present - if any more had shown up, we would have needed to extend the Sanctuary... The singing was beautiful, and it was wonderful to hear both plainchant and polyphony being used. 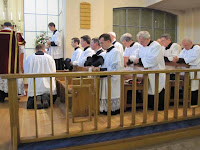 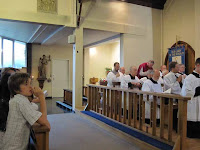 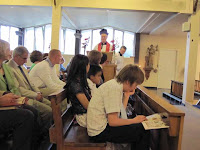 Fr. Roger Nesbitt, co-founder of the FAITH Movement, gave the sermon, and he congratulated Fr. Tim on picking the Year of the Priest for his Jubilee, which was amusing. He also spoke very movingly on a theme which I hold dear: without priests, there is no Church, because there would be no Sacraments; he exhorted us therefore to pray for all our priests. I tried to video the sermon, but it didn't quite work, possibly because the light from the windows interfered with the colour balance (or something!) Before you ask, the boy in the photo reading what looks like a comic book is actually reading a copy of Know Your Mass which Fr. Tim has recommended for anyone who wants to understand the Usus Antiquior a little more.
My favourite heart-stopping moments of all time... 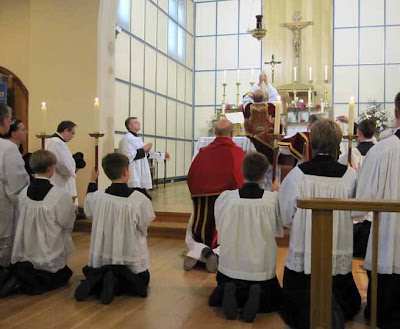 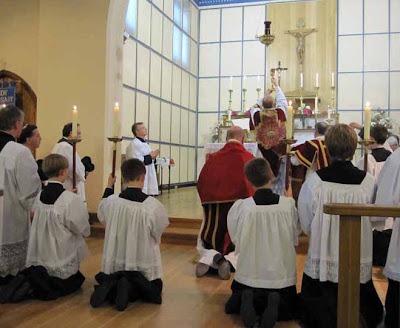 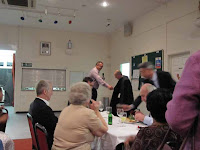 After Mass, we went over to the Parish Club for refreshments: a splendid marquee helped to ensure that there was room for everyone. Trefor from the Jubilee Committee had drawn the short straw, and had to make a speech before presenting Fr. Tim with the gift from the Parish: he did extremely well. Fr. Tim gave a speech of thanks (during which the microphone gave up the ghost!) and this was followed by the Old Romans present singing Ad Multos Annos, which was very moving. 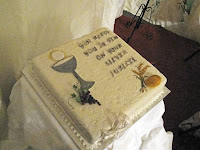 Before the end of the evening, Fr. Tim went to cut the cake. I managed to get a perfect shot of the cake itself (by not using a flash) as well as positioning myself perfectly for the actual cutting of the cake. Carl, acting as official photographer, decided to stand behind the cake, for a better shot... and found his view promptly obscured when Fr. Tim went and stood right in front of him... Ha! Not that I'm being competitive or anything... 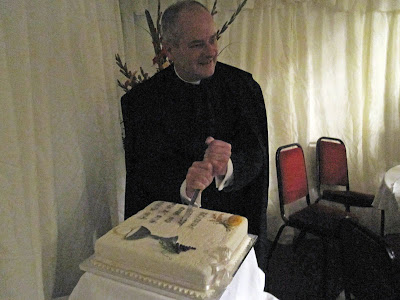 I did wonder whether Fr. Tim was thinking about The Suppository's editorial board... he was gripping the knife rather firmly, and the cake, beautifully baked and decorated by parishioners Maria and Bianca, wasn't at all hard to cut...
Finally, after a few more drinks and reminiscences, it was time to leave. I had left my car at home, and so, with Puella Paschalis (who, as an old friend, had arranged to stay with me overnight), I took a cab home. No photos of either of us, so don't bother asking... Puella had had a bad night and an even more fraught journey over from the Netherlands, so I couldn't keep her awake while I blogged away merrily, which is why I didn't get anything up any sooner. Hopefully, you will feel that the post was worth the wait.
A message to Fr. Tim: Congratulations on your Silver Jubilee, thank you for all the years of selfless devotion to God and His Church, and ad multos annos.
Posted by Mulier Fortis on 29.7.09

A wonderful time was had by all! Thanks for the post.

You make sound like Silvester!
Was't it great do!
It was good to see you recovered.

You are not on my blog roll because I do not know how to make this manoevre. I get some others who know my code password entry to do it for me. I will enquire. Photo is very good. I would have liked to meet Ponte sisto who has permanent link but I do not know his real name.

Fr. Ray, believe me, Sylvester isn't half as charming...

We all had a great time, it was just such a wonderful evening. The whole Church was filled with so many good and Holy Priests it was a priviledge to be there.
The choir was amazing and time just flew by.

I feel so honoured to know Father Tim. In time children will say I knew Father, he was our Parish Priest and now he is being Canonised.

It was a wonderful evening, and very moving.

But I completely missed the cake!

Sorry to drop some grit in your ointment but "upper class" accent? Does this mean Fr B is well spoken? I am not upper class but like to believe that I am well spoken, something that more should aspire to in these days of unintelligible regional accents. Sorry, not very PC that!
A great occasion nonetheless. My erstwhile PP used to get very hot under the collar when parishioners would approach him after Mass and say "that was a beautiful Mass, Father". "Every Mass is beautiful" he would, quite rightly respond. But I know what they meant.

Incidentally, what is the PC term for "person who went to public school and whose father and grandfather also went to public school"? As a foreigner, I have an embarrassing curiosity about such matters. Also, is "well-spoken" a euphemism for "I speak in RP instead of my parents' regional accent"?

Ponte Sisto was there?!?!

Oh, and my dear Mac - once asleep I was comatose. You could have blogged to your heart's delight, and giggled at comments and such, and I wouldn't have even flinched in my sleep!

I don't recall seeing Ponte Sisto... though maybe I am suffering from amnesia.

If he was there, I am extremely annoyed that he didn't come and say hallo... spelling out that he was Ponte Sisto, of course...

Where did all those birettas (spelling ?) come from? I haven't seen that many priests wearing them since ....well, not sure. Looks like it was a lovely, happy family parish do. But ..... Father is only ordained 25 years, presumably he was ordained according to all the new rites etc. So, where does all this stuff with birettas, Mass with back to the people, Latin, etc. come from ? I do worry a little that some priests like to play around, dress up, be a bit prissy and fussy with the Mass, whereas it deserves more than that I think. It's not a Panto. Or a performance. And all this harking back to the past, to a style and tone which isn't really where the Church is, not even in Rome ... I do wonder who it serves. It doesn't feel manly and robust enough for me. So, lovely do, happy occasion it may have been, but why not just stick to the liturgy of Vatican II and the norms of dress and liturgy that is the Church nowadays. Leave the rest to the Oratorians.

Serving Blogger - you are so wrong I hardly know where to begin.

To start with, the "norms of dress and liturgy that is the Church today" are not those envisaged by Vatican II, as a simple reading of the General Instructions for the Roman Missal would reveal.

I don't know why people get so worked up about priests wearing ceremonial garb when there are priests who like to play guitar during mass.