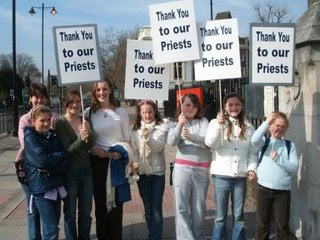 As we are now entering the second week of Lent, I am aware that I need to start organising our annual Chrism Mass "demonstration" in support of our priests.
A few of us started it in Southwark in 2003, and we've gone from strength to strength - a group of us wave placards and cheer as the priests process in to Mass, and we hand out small cards as a "thank you" - last year's card is shown on the left.
Following on from the success of the demo at Southwark, Westminster diocese had their own little "thank-you demo" for the past couple of years, and last year I think there was a third diocese to experience it (I forget which one!)
The Chrism Mass is where the priests of the diocese come together to renew their allegiance to their Bishop, so it seems to be a particularly good opportunity to have a public display of gratitude for all that our priests do for us.
I am singularly devoid of good ideas for this year's card, so any prayers for divine inspiration would be greatly appreciated...
The Southwark demo will be on Maundy Thursday, 9th. April 2009, at St. George's Cathedral, starting at 10:35am (the priests process in at 11:15am) and then some of us will go off to the Three Stags pub, on the corner of Kennington Road and Lambeth Road. If any of you are free that morning and would care to join us, please come along.
Posted by Mulier Fortis on 9.3.09

What about the following devotion, we will be there to support our Priests again this year.

" Oh, how very great is their power. A word falls from their lips and the body of Christ is there substantially formed from the matter of bread, and the Incarnate Word descended from Heaven, is found really present on the table of the altar! Never did Divine goodness give such power to the Angels. The Angels abide by the order of God, but the priests take Him in their hands, distribute Him to the faithful, and partake of Him as food for themselves." "

Lambeth? Huh. The skies ain't blue, the grass ain't green. It hasn't got the Mayfair touch, but that don't matter, very much.

Might be tough going finding a holy card with a pearly king on it...

What a nice idea.

What about something from Robert Southwell on the priesthood for the cards?

Mac, how about something from this most Holy Priest on the Priesthood. It is so powerful that since reading it I can't shift it from my mind. We should think deeply and pray on St John Vianney's words:

'My children, we have come to the Sacrament of Orders. It is a Sacrament which seems to relate to no one among you, and which yet relates to everyone. This Sacrament raises man up to God. What is a priest! A man who holds the place of God -- a man who is invested with all the powers of God. "Go, " said Our Lord to the priest; "as My Father sent Me, I send you. All power has been given Me in Heaven and on earth. Go then, teach all nations. . . . He who listens to you, listens to Me; he who despises you despises Me. " When the priest remits sins, he does not say, "God pardons you"; he says, "I absolve you. " At the Consecration, he does not say, "This is the Body of Our Lord;" he says, "This is My Body. "

Saint Bernard tells us that everything has come to us through Mary; and we may also say that everything has come to us through the priest; yes, all happiness, all graces, all heavenly gifts. If we had not the Sacrament of Orders, we should not have Our Lord. Who placed Him there, in that tabernacle? It was the priest. Who was it that received your soul, on its entrance into life? The priest. Who nourishes it, to give it strength to make its pilgrimage? The priest. Who will prepare it to appear before God, by washing that soul, for the last time, in the blood of Jesus Christ? The priest -- always the priest. And if that soul comes to the point of death, who will raise it up, who will restore it to calmness and peace? Again the priest. You cannot recall one single blessing from God without finding, side by side with this recollection, the image of the priest.

Go to confession to the Blessed Virgin, or to an angel; will they absolve you? No. Will they give you the Body and Blood of Our Lord? No. The Holy Virgin cannot make her Divine Son descend into the Host. You might have two hundred angels there, but they could not absolve you. A priest, however simple he may be, can do it; he can say to you, "Go in peace; I pardon you. " Oh, how great is a priest! The priest will not understand the greatness of his office till he is in Heaven. If he understood it on earth, he would die, not of fear, but of love. The other benefits of God would be of no avail to us without the priest. What would be the use of a house full of gold, if you had nobody to open you the door! The priest has the key of the heavenly treasures; it is he who opens the door; he is the steward of the good God, the distributor of His wealth. Without the priest, the Death and Passion of Our Lord would be of no avail. Look at the heathens: what has it availed them that Our Lord has died? Alas! they can have no share in the blessings of Redemption, while they have no priests to apply His Blood to their souls!

When the bell calls you to church, if you were asked, "Where are you going?" you might answer, "I am going to feed my soul. " If someone were to ask you, pointing to the tabernacle, "What is that golden door?" "That is our storehouse, where the true Food of our souls is kept. " "Who has the key? Who lays in the provisions? Who makes ready the feast, and who serves the table?" "The priest. " "And what is the Food?" "The precious Body and Blood of Our Lord. " O God! O God! how Thou hast loved us! See the power of the priest; out of a piece of bread the word of a priest makes a God. It is more than creating the world. . . . Someone said, "Does St. Philomena, then, obey the Cure of Ars?" Indeed, she may well obey him, since God obeys him.

If I were to meet a priest and an angel, I should salute the priest before I saluted the angel. The latter is the friend of God; but the priest holds His place. St. Teresa kissed the ground where a priest had passed. When you see a priest, you should say, "There is he who made me a child of God, and opened Heaven to me by holy Baptism; he who purified me after I had sinned; who gives nourishment to my soul. " At the sight of a church tower, you may say, "What is there in that place?" "The Body of Our Lord. " "Why is He there?" "Because a priest has been there, and has said holy Mass. "

What joy did the Apostles feel after the Resurrection of Our Lord, at seeing the Master whom they had loved so much! The priest must feel the same joy, at seeing Our Lord whom he holds in his hands. Great value is attached to objects which have been laid in the drinking cup of the Blessed Virgin and of the Child Jesus, at Loretto. But the fingers of the priest, that have touched the adorable Flesh of Jesus Christ, that have been plunged into the chalice which contained His Blood, into the pyx where His Body has lain, are they not still more precious? The priesthood is the love of the Heart of Jesus. When you see the priest, think of Our Lord Jesus Christ'.

Sorry it's a bit long, but I would not dare edit this great Saint's words. God Bless.

Heheheh... WAY too long to fit onto the back of the card, George, but many thanks for the quote!

A lovely idea. Do you actually go to the Mass, or just wait outside until the priests have processed in?

In previous years I've gone to the Mass...

but the hymns are so dire, and the homily so lacklustre that it's a bit of an ordeal (as well as being pretty packed, which makes it difficult to get a seat) and one watches the whole thing on TV screens - which sort of makes the whole thing rather pointless.

The lack of reverence during Communion is also upsetting. So I doubt that I shall stay for the Mass this year!