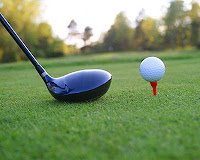 This one was sent to me by a friend of mine, who shall remain nameless... (that way he can't take the credit!)
A golfer was in a very competitive match with a friend, who was ahead by a couple of strokes.

The golfer said to himself, "I'd give anything to sink this next putt."

Suddenly, a stranger walked up to him and whispered, "Would you give up a fourth of your sex life?"

The golfer reflected that the man was crazy and that his answer would be meaningless, but also that perhaps this was a good omen and it would put him in the right frame of mind to make the difficult putt, so he agreed. To his delight, he sinks the putt.

Two holes later he mumbled to himself, "Boy, if I could only get an eagle on this hole."

The same stranger moves to his side and whispered, "Would it be worth another fourth of your sex life?"

The golfer shrugged and said, "Sure." To his surprise, he got an eagle.

At the final hole, the golfer needed yet another eagle to win the game.

Though he said nothing, the stranger moved to his side and asked once more, "Would you be willing to give up the rest of your sex life to win this match?"

The golfer agreed once more, and went on to get his eagle.

As the golfer walked to the club house, the stranger walked alongside. "You know," he said, "I've really not been fair with you because you don't know who I am. I'm actually the devil, and from now on you will have no sex life."