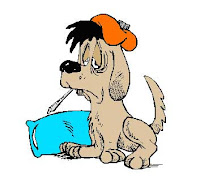 After another really lousy night, I decided to go to the doctor. Several people (including my mother) told me that I should have gone much sooner... I didn't bother to explain that I wouldn't have been able to go any sooner, given that I wasn't actually at death's door (and so didn't need to get the emergency services out) and the fact that my GP's surgery was closed for New Year.
I got there just before 8am, to find that a sizable queue was waiting for the doors to open. My heart sank, as I didn't feel like exchanging whatever I had for the collection of viruses being incubated by the others. Fortunately, the majority of the other patients appeared to want to collect prescriptions and sick notes, and there were one or two appointments for the nurse. I was informed that there was only one GP in this morning, and that it was a case of sit and wait rather than the usual appointment system... and so I went and sat.
I told the doctor that I'd been ill already for about a week (thus establishing my credentials... GPs usually send you home with a flea in your ear if you dare to see them too quickly after the onset of whatever it is) and that I was coughing up some rather nasty gunk (yellowish-brown and sort-of solid-looking.) The stethoscope was duly whipped out and my lungs listened to. Apparently I was crackly and wheezy enough for a quick diagnosis: "Yes, there's more of it about than people realise, despite all the news reports," he opined. "I've had it already. The other doctor due on this morning has also got it... that's why he's not in. It's spreading. We're in for a bad bout of it."
Feeling slightly guilty, I asked if I should be staying away from other people, especially as I'm a teacher. "No, you should be fine on the antibiotics and the steroid inhaler... and anyway, if there is a flu epidemic, the schools will all be closed... that's the emergency action plan..."
So, there you have it. Parents, if your pride and joy tells you that he (or she) is feeling ill, don't ignore it and send him to school anyway, not unless you want lots of little horrors to catch the bug and all get sent home for a fortnight. Just remember: Christmas Holidays, round 2, without the distraction of presents.
Of course, speaking as a teacher, the idea of a two-week break in the interests of Public Health sounds quite appealing...
Posted by Mulier Fortis on 2.1.09

Sorry to hear you are under the weather.

My family has been coughing all holiday and judging by the coughs in Church, so has everyone else.

I don't feel too bad now... it's just the coughing and the lack of sleep!

I (cough, cough) empathise (snuffle) totally .... Have shied away from the doctor so far, but perhaps ...

The Antibiotics will get rid of most of the nasty gunk. I'm almost nearing the end of mine, and starting to feel a lot better!

I've had it too, along with all my family... Has ANYONE escaped?

Antibiotics AND steroids?! Here you have to beg these so-and-sos to get the antibiotics. "Look, this is the green death thing I manage to catch almost every year, sometimes twice, don't even bother and just give me the damn antibiotics." But no. You have to go through the dog and pony show.

It's been a pandemic up here, at one point I was the only well one in the house, all 4 of them were sick! I know of few people it has not affected.

The state some of my pupils roll up in suggests the only thing that would stop them being sent to school is a death cert. Result - spreads like wildfire.

Before Christmas I got the vomit virus, threw up into my bin in my room, mercifully it was a free period!

Get Well Soon - and please feel free to break resolutions 2 and 3 as often as you can !!!!!

And, once the antibiotics kick in, A Happy New (Calendar) Year.