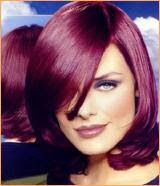 How about nice Mouse with a few blond streaks??

I also did the aubergine a few years ago (natural colour being blondy brown)- and returned to pick up my toddler from nursery - and was initially refused access......till they did a double-take. I looked like Samantha's evil cousin in "Bewitched". I now realise if one is old enough to remember Valerie Singleton on Blue Peter, then one's skin tone needs light relief - not contrast - from the surrounding hair colour. Good job you got it sorted before the Year 10s saw it...

Girlfriend....*sigh* you call yourself a scientist and you haven't figured this out?

When trying something new you take some of your hair (the color it is now) get it a bit of a trim (assuming you can afford to trim your hair a bit) -- you take the cutting and apply it to the trimmed hair......dry. Duh. If it sucks, then don't apply it to the hair attached to your head. Yes, you may "waste" money on dye that doesn't pan out, but the extra money possibly spent beats you bitching and moaning about bad results after.

BTW, I was amused at Fr. Tim's "Fifth amendment" stance. Doubtless given the amount of sisters he has taught him early on not to answer questions like "does this hair color suck" or "does this dress make my butt look big?"

His lack of response in such matters, btw, PROVES he is not gay, due to the fact that a gay man WOULD tell you. ;-D

I hope it doesn't go green like mine did once!

The Pious Sodality of Church Ladies led me to your blog.

Ladies' hair seems to be the topic du jour of the blogging world at the moment. Perhaps you could help Deb ay UKOK - I'm blown if I can. I'm now at the age where I need to worry about keeping hair, let alone colouring it. LOL

I did that when I was a teen. My mother was horrified that I had pink, orange, yellow and green hair so she sent me to a hairdresser.
They tried to strip the colour but it didn't work. They ended up dying it a really dark brown colour. It looked horrible because I am fair and had natural blond hair then.

When in doubt, try black dye. It should cover everything.