Photos From THE Mass...

His Hermeneuticalness was obviously very industrious this morning, as my memory stick (handed over at dinner) was waiting for me after Mass this morning (and he has already posted the best of them!) I was teased mercilessly in the pub after the Mass, with someone asking me if I realised I had taken 3000 photos. Sure enough, I had taken lots of photos (but not 3000!) Unfortunately, many of them, as I suspected, were pretty dire, partly because it was rather crowded, and if people moved their heads slightly, they sort of got in the way of the photo. I didn't feel able to wander round the Cathedral snapping away - I was trying (and probably failing) to be discreet. Fr. Tim's camera doesn't need a flash, which cuts down on the disruption, and isn't one which makes big whirring noises with large clicks.

I also had a bit of a problem holding the camera steady - it is a bit of a beast, that camera, with an impressive, but heavy, zoom lens.

This was probably one of the best... Fr. Tim has already posted it, so I can hardly claim an exclusive. However, he failed to mention that he, himself, is on the Cardinal's left, holding the cloak (I can't remember the fancy Latin name for it!) It was also very moving to see everyone genuflect as the Cardinal passed by. 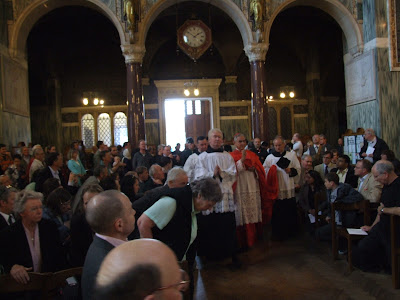 I think this was taken during the sermon... there was a lot of activity at the throne before the Mass as well, but it was difficult to see (partly because of all the scaffolding.) There were two mitres, I'm not sure which one is shown here... no doubt someone can tell me in the com-box! 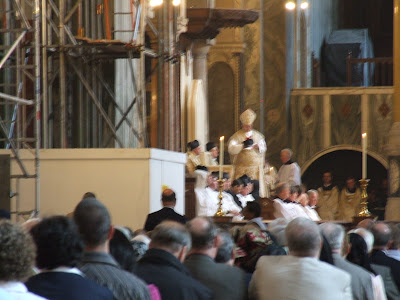 This one is a bit blurred, but you can see some of the Cathedral choristers. I must try to see what I can do when I have time to play around with photoshop... 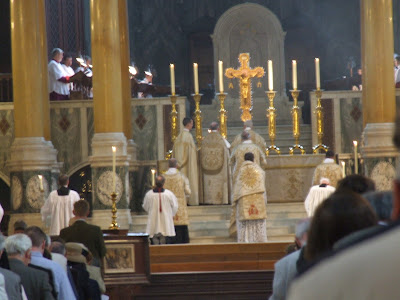 The Red Vestment the Cardinal was wearing is a Cappa magna.

Don't ask me about the Mitre lol.

I have it on good authority that it wasn't as "Magna" as it should have been... it had, sadly, been chopped down to size in such a way that it couldn't be fixed. It was still pretty impressive though!

ah, mystery solved. I was wondering why half the congregation was on its knees. I'm pretty sure I wouldn't have been though (even if I had good knees.) Since when does a person genuflect for a mere mortal? Even cardinals? ... unless he was carrying a monstrance. As to the cape ... I expect you mean "cappa magna."

Karen, it's a sign of reverence and respect, for his office, not for the "mere mortal."

Then we should be genuflecting for every priest walking in to Mass too...but we don't!

I understand from Fr. Tim's blog that the Cardinal was giving a blessing on the way OUT which would account for the genuflection. but was he giving one on the way IN?

Yes, we should... and some people still do. Some people also kiss the hands of a priest (it's not a common custom in anglo-saxon countries, probably because of the Protestant legacy which sought to play down the sacrament of Holy Orders)

The Cardinal blessed everyone on the way in (the picture on Fr Tim's blog is the same one as on mine) - this was a formal blessing. He also blessed people on the way out (this was more informal)

My mother told me that when she was a girl growing up in the 30s and 40s when you met the priest on the street you did kiss his hand. [She was eastern rite) I'd be surprised if the Latin rite catholics did it then.

"Then we should be genuflecting for every priest walking in to Mass too...but we don't!"

My wife aqnd I do. I think we are two of only a handful in our poarish who do this but of course most don't even bow or genuflect at the appropriate times during he Creed. But we hope we are witnessing to others and that it will catch on. We also are pretty much the only ones who receive communion on the tongue.
We actually attend a TLM today and everyone bowed as the priest passed by. As someone else said, it respect for the vocation, not necessarily the person