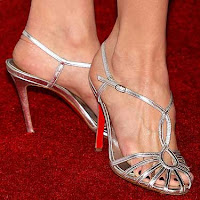 It's that time of year again: our parish Confirmation classes have started up.

We have found that boys and girls approach Confirmation in different ways. After accidentally ending up with boys and girls attending on different nights last year (something to do with football practice) and finding it to be a great success, we decided to make it a deliberate choice this year.

Fr. Tim had mentioned suitable attire at the (mixed) introductory session for candidates and parents, and he told the youngsters that they needed to be careful with new shoes, as kneeling down would be difficult.

So, at the first Confirmation class for the girls, I told it like it is: Fr. Tim, being a mere man, had got it wrong. Kneeling down in high heels is not difficult. However, what is difficult is getting back up again without a Communion rail for support... leaning on the Bishop's knees as one tries to stand is not really an option...!
Posted by Mulier Fortis on 23.1.08

weird. I've changed tires in heels before and chased down toddlers in stilettos. Its walking ice that I ve yet to master.

I've introduced a new practice for my Confirmation class this year. No more rubbish and odd coloured things.

The girls will all be wearing veils, of white lace which we've imported from the Philippines. The boys will appear in white long sleeved shirts and black or white pants. I haven't decided on the tie colour yet. I'm wavering between black, white and red.

Any suggestions? We have about 40 of them, by the way.

Let me make sure I understand you --- The girls you deal with actually dress up for church?????? Our girls look like ratty boys - even at church. Most of them do not even own a dress. So sad!!

Ratty boys? I wish. Ours look like - er - women of the streets. Bournemouth is the clubbing centre of the south coast (you have to go to Brighton before you get the same concentration of clubs), and that's the desired look round here: tiny skirts, glittery cropped backless or strappy stops and - yes, heels!