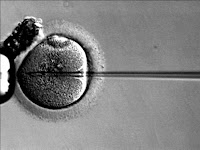 This is the last chance to make known your views on the Human Fertilisation and Embryology bill, which is currently scheduled for debate in the House of Lords on Monday 4 February.

John Smeaton, Director of SPUC, stated on his blog that:

The Bill seeks, among other things, to:

Over recent weeks, the Government and supporters of embryo research have blocked all substantial efforts to lessen the evils of the Bill during its passage through the Lords. Although it is unlikely that pro-life Lords will defeat the Bill, a strong vote against it now will help and encourage MPs to oppose the Bill when it goes to the House of Commons - probably in mid-February. Many people wrote to the Lords in November asking them to oppose the bill at second reading - this had great impact and helped encourage pro-life peers in their opposition to the bill.

It really is vital that as many people as possible write - you can write to any of the Lords on this matter. Even though the Bill is unlikely to be defeated, the important thing is that no-one can claim that they didn't receive any letters in opposition, or that no-one appears to have any real objections because they'd write if they did!

Remember, one day you are going to have to stand before Jesus Christ, and when he asks what you did for even one of his "little ones" (remember that cup of water he mentioned?) you might want to have an alternative to "Umm, nothing much, actually! Sorry about that..."

Writing a letter isn't difficult. SPUC provide helpful hints. They also provide email addresses for most of the Peers, although they also state that written letters are more likely to have an effect. SPUC is the pro-life group with most experience of parliamentary matters, so I would recommend taking their advice.

And don't forget to let Anthony Ozimic, SPUC's Political Secretary know about any answers you get...
Posted by Mulier Fortis on 27.1.08

Mac, I'm confused by the email addresses on the SPUC website. It seems all the Lords are there! How do I know which ones to best write to?

On a sortof related matter, I have found that the Union I am in (which I am only in in case someone tries to stab me in the back) is becoming officially pro-abortion.

Hope you're doing well. I am still under the weather from last week (Doctor tomorrow!).

Mark - it doesn't matter which Lord you write to: they don't have constituencies.

You might want to google a few to find out what committees they sit on...

Does anyone know which of the Lords are bishops? I'd like to target my letter

Check out the names in the list of email addresses - the bishops are the ones with "Archbishop" or "Bishop" in front of them...
;-)

LOL Mac- now that was just too easy!

Do you think they'll care if Americans write to them, or is this a strictly Brit post?

But please, by all means, feel free to write. It might be a wake-up call for them to realise why this is going to make the UK into a pariah state for any right-minded individual!

I am biologist and I was very touched discovering the bill actually allows experimentation on human-animal embryos.I have actually written an email to Lord Alton and he sent me a list of rallies organised acros the country. I posted the copy of the letter on Mount Carmel Bloggers, but there was hardly any response to this. Therefore I am copying it here, there are some useful hints for those who wish to take part in protesting the bill. One can obtain cards to distribute to make people know more about the bill etc. Unfortunately London rally is on Ash Wednesday:

Many thanks for your e-mail.
There will be a rally to draw attention to the provisions of the Human Fertilisation and Embryology Bill at Methodist Central Hall, Westminster, at 7.00pm on Ash Wednesday, February 6th. Please do encourage people to come. I know that our opponents intend to be out in force. Speakers will include the Rt.Hon Ann Widdecombe MP. Other rallies;
* London: Central Hall Westminster, SW1:- Wednesday 6th February, 7pm
* Liverpool: The Liner Hotel, Lord Nelson Street:- Tuesday12th February, 7.30pm
* Coventry: Coventry Cathedral:- Wednesday 13th February,7.30pm
* Widnes: The Foundry, Lugsdale Road:- Monday 18th February,7.30pm
* Cardiff: The City Temple, Cowbridge Road East:- Tuesday 4th March, 7.30pm

For further information tel. 01925 220999 or 0203 1760032 or email: gill@epiphany.org.uk or ian.lucas@appplg.co.uk It would be good to see big audiences and hopefully many other smaller meetings will be organised in the wake of these. It's vital that the public learn what is at stake in this Bill. Post cards are now available to send to MPs. Please e-mail Ian Lucas, who will be pleased to send them to you for local distribution. A power point presentation explaining the Bill is also attached and this may be used at local meetings or to forward to others.
Subject: FW: Human Fertilisation and Embryology Bill Latest
Votes were taken in the House of Lords, on Monday, January 21st , on the child's need for a mother and a father. These votes were lost. Last Tuesday, January 15th, votes were taken on the creation of animal-human hybrids and saviour siblings. These votes were also lost. On Monday January 2 8th, the House debated the creation of a national Bio-ethics Commission. It also considered Baroness Masham's amendment on abortion of disabled babies up until birth and voted against it.

On February 4th the Bill will have its Third Reading and there will be a vote on the "Hunt" Test - proposed by Baroness (Shirley) Williams - on forbidding human embryos or animal-human embryos to be used unless the licence applicant can demonstrate that there are no alternatives available.

The Bill will then be sent to the House of Commons, with votes probably being taken in February on Second Reading.
The Government imposed a three line whip on its supporters in the House of Lords and is likely to do the same in the Commons.

Some or the arguments on these issues are set out below."

I think I need to made it clear the whole bill is worrying and terrifying thing, not only hybrids, but this amendment to the bill is a novelty. What else could be there in future amendments???