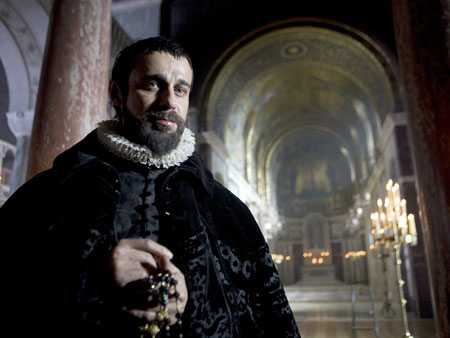 Oh boy. The Westminster Cathedral crowd really do seem to have a knack for dropping enough bricks to build... well... a cathedral!

To add to their use of napkins (see my post for a definition) at high-profile events like Corpus Christi processions, the débacle of hosting the launch for Jeffrey Archer's so-called Gospel of Judas, and then the kerfuffle over Taverner's 99 Beautiful Names, they now add another faux pas.

The sequel to the awful film Elizabeth is due out later this year. It will be screened in Canada in September, and over here some time after that. Elizabeth was bad enough: the myths about "good" Queen Bess were perpetuated and a whole bunch of lies about the Catholic Church (including the presentation of a Jesuit priest as a murderous assassin) were presented as absolute fact. The sequel, called The Golden Age, promises to be even worse: it continues with the idea that the Catholic martyrs of the Reformation period were all bloodthirsty murderers, and asserts that the Armada was bringing the Spanish Inquisition along with it (with the implication that this would be a bad thing...)

And now for the rub: they couldn't use the Escorial (not entirely sure why... perhaps the Spanish felt rather more strongly about the lies being perpetuated by the film) so they needed to find a suitable "stand-in." And yes, they picked Westminster Cathedral...

Monsignor Langham actually seems to be pleased about this. And he can't plead ignorance of what was going to be portrayed in the film. The post on his own blog, Solomon, I Have Surpassed Thee, makes this quite clear...

"The trailer is now available; from it one gleans a thrilling, if distorted, version of historical events, and it does appear to perpetuate the myth of 'killer priests'. However, it does look spectacular and evocative, and is a 'must see' for the autumn!"

Oh, right... it distorts the truth and brings the Catholic priesthood into further disrepute among ordinary non-Catholics who don't actually know any history and believe everything they hear on the BBC and read in the papers... but if it's a good film, then it doesn't matter... oh, well, that's okay then...!

Twitch of the mantilla to Carpe Canum.
Posted by Mulier Fortis on 12.8.07

Would I be right in thinking that a substantial 'location fee' had anything to do with this further 'secular' use of a consecrated church? More like the actions of a pimp than a Cathedral Dean (for that is what they seem to be called these days).

Somehow, I can't see the Holy Father nodding through a request to use St Peter's as a location for a remake of "The Borgias".

I used to like him and his blog; to be truthful, now I'm not so sure. He seems to be content, as you say, in broadcasting distortions of the truth.

I presume the Cardinal and his auxillaries would have been consulted about the use of the Cathedral for this film. It is a sad reflection on them that the "Mother Church" of our nation should be used to perpetuate anti-Catholic myth and sully the name of those glorious martyrs of the faith.
Following on from the Cathedral being used for the performance of the 99 Beautiful Names one is left to ask: to what ends will the Cathedral authorities not stoop to for their thirty pieces of silver?

Is it folly or avarice that drives them?

When Hollywood were looking to film the Da Vinci Code in Westminster Abbey the Dean, very correctly and for the right reasons, said no.

The Dean of Lincoln on the other hand, couldn't wait to get to the bank.

Well I told Mgr Langham exactly what I thought...
But to be frank I am just so hurt by them...
Thirty pieces of silver?
They're acting like they'd sell their souls for ten benson, a mucky mag and a chance to get their face on telly or their name in the newspaper.

Completely off-topic.
I'm curious.
Does anyone know the meaning of his blog title?
Thanks.

It was the boast by the Emperor Justinian on the completion of the Hagia Sophia, referring to Solomon's Temple in Jerusalem.

The Hagia Sophia has been converted to a mosque, I think...

Anyway, presumably it's making a reference to the Byzantine style of Westminster Cathedral, but I feel that it's rather an arrogant title...

Yeah, that's it, Mac. I'm not sure it's so much in bad taste, because the Cathedral is notably in the Byzantine style...but I'm growing very cold towards the author.

Another example of the work of the &^*&^$£$ heirarchy's priorities. I am beginning to hate them - pray for me!

This is what I wrote to Fr. Langham, he did not post it on his website, now there's a surprise!

I take it that you asked the film company more than 30 pieces of silver for this transaction? You ought to be ashamed of yourself for lending the City Cathedral for this public display of indecency about our Catholic Priests. You continue to use the Cathedral for public spectacle, like the public farce of 99 names for Allah concert which brought you only disrepute. STOP offending Your God, in the name of your Priesthood, stop right now!

Has the cock crowed yet?

How much more of this are we supposed to put up with?

I sent a message to his blog saying politely that this was a wrong thing to do.
Wonder if he'll allow it.

Anonymous - I will certainly pray for you: we need to hate what the hierarchy are doing when it is so obviously wrong, rather than hating the hierarchy themselves.

Anne & White Stone - he hasn't published my comment either. To be fair, he might not have time (or energy) to blog on Sundays. I shall check again tomorrow...

Hagia Sopha was turned into a mosque after the conquest of Constantinople in 1453, but under Ataturk (in line with his secularization policy in Turkey, I guess) it became a museum, and is so still.

I have the opportunity of going to Mass at Westminster Cathedral each day and each and every day there are so many candles and devotees at the Relic body of St. John Southwark a Priest, Saint and Martyr who died for the Mass for his fellow Priests so that they could be Holy and freely Proclaim the Word of God and the Eucharist in Westminster and in England. Then in the very place where his Dear and Sacred body remains there are people who wish to use this public place of worship to promote, twist and destroy the reputation of the Holy Priesthood. I feel offended by this action and will make it known to him.

Thank you for the info, Mac.
(It seems a bit odd to me, but whatever, I guess.)

These are abundant fruits of false ecumenism.

I'm almost surprised the saint in the Cathedral hasn't gotten up to tell off the hierarchicals yet!

Mac, St Sophia's cathedral was indeed turned into a mosque, and one can read about how it happened in Oriana Fallaci's magnificent book The Force of Reason, the relevant extract of which reads thus:

"…Crashing aside the Christians at Varna in 1444 they secured possession of Walachia, Moldavia, Transylvania, the territory now called Bulgaria and Romania, then in 1453 they put again under siege Constantinople which on May 29 fell into the hands of Mehmet II and by the way:
do you know who was Mehmet II?

A guy who, by virtue of the Islamic Fratricide Law which authorized a sultan to murder members of his immediate family, had ascended the throne by strangling his three year-old brother.
Do you know the chronicle that about the fall of Constantinople the scribe Phrantzes has left us to refresh the memory of the oblivious or rather of the hypocrites ?

Perhaps not. Especially in Europe, a Europe that weeps only for the Muslims, never for the Christians or the Jews or the Buddhists or the Hindus, it would not be Politically Correct to know the details of the fall of Constantinople.

Its inhabitants who at daybreak, while Mehmet II is shelling Theodosius’ walls, take refuge in the cathedral of St. Sophia and here start to sing psalms. To invoke divine mercy. The patriarch who by candlelight celebrates his last Mass and in order to lessen the panic thunders:
“Fear not, my brothers and sisters! Tomorrow you’ll be in the Kingdom of Heaven and your names will survive till the end of time!”.

The children who cry in terror, their mothers who give them heart repeating:“Hush, baby, hush! We die for our faith in Jesus Christ! We die for our Emperor Constantine XI, for our homeland!”.

The Ottoman troops who beating their drums step over the breaches in the fallen walls, overwhelm the Genovese and Venetian and Spanish defenders, hack them on to death with scimitars, then burst into the cathedral and behead even newborn babies.

They amuse themselves by snuffing out the candles with their little severed heads... It lasted from the dawn to the afternoon that massacre. It abated only when the Grand Vizier mounted the pulpit of St. Sophia and said to the slaughterers:
“Rest. Now this temple belongs to Allah”

Meanwhile the city burns, the soldiery crucify and hang and impale, the Janissaries rape and butcher the nuns (four thousand in a few hours) or put the survivors in chains to sell them at the market of Ankara. And the servants prepare the Victory Feast.

The feast during which (in defiance of the Prophet) Mehmet II got drunk on the wines of Cyprus and, having a soft spot for young boys, sent for the firstborn of the Greek Orthodox Grand Duke Notaras. A fourteen year-old adolescent known for his beauty. In front of everyone he raped him, and after the rape he sent for his family. His parents, his grandparents, his uncles, his aunts and cousins. In front of him he beheaded them. One by one. He also had all the altars destroyed, all the bells melted down, all the churches turned into mosques or bazaars.

Oh, yes. That’s how Constantinople became Istanbul. But Doudou of the UN and the teachers in our schools don’t want to hear about it."

Msgr Langham has put up another comment on his blog; though ungrammatical, it appears to be offering him congratulations. How bizarre.