A Little Taste of Heaven

Ok, now pay attention you lot ! Northern Cleric, put the ice-cream down. Stephen, stop teasing the cats and put the camera away. Pull yourself together, Newhousenewjob: it's very bad form to giggle at your own jokes, so will you please stop... and don't think I didn't see those bluebells in your pocket, Dúnadan...

Now I have your undivided attention, I just thought I'd make my feelings absolutely clear... when I die, I want my Requiem to be celebrated in the Classical Roman Rite. I attended my first Old Rite Requiem today, and it was just so awesome... 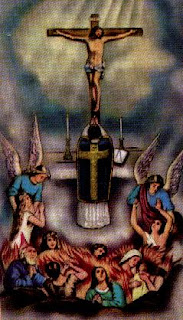 Just to set the scene: altar set up for Mass ad orientem, priest in cassock, black vestments and biretta... holy water and incense ready to go... and people praying quietly.

This desire for a Classical Latin Requiem Mass isn't just me being traddy. It makes total sense. No-one in my family is a practicing Catholic, so they won't know what's going on at the Mass anyway, or when to stand, kneel or sit... so I'll make it easy for them: kneel down at the start, and stay kneeling until the end, except for the two Gospel readings. I'm assuming that they will be in no fit state to pay any attention to the prayers, so they can forget about trying to keep up with them: the audible bits are in Latin, but most of it is silent, so a person can pray quietly, or they can indulge in some histrionic weeping and wailing without interrupting the Sacrifice of the Mass.

Three hymns: Offertory (lets the priest get on with his prayers), Communion and Final hymn (so the priest can go out and change out of the vestments and into the cotta for the sermon.) I am not completely sure which hymns... but you can bet your bottom dollar that "Colours of Day" won't be one of them. Something to Our Lady for the Offertory ("Mary Immaculate" perhaps) and "Soul of my Saviour" or "O bread of heaven" for Communion, with "Guardian Angel from heaven so bright" to finish up. The priest will sing "In Paradisum" at the end... (if he doesn't, I'll come back and haunt him!) 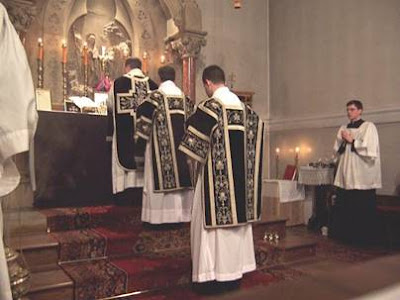 Not least because none of your family are Catholics perhaps you should make out a will in which you specify what kind of funeral you want.

That first paragraph is the funniest one I have read in a long time (although I do deny all knowledge of bluebells in my pocket :-))!

Well, my sister (and possibly step-father) are RC, but not practicing...

Glad you liked my opening gambit. I find it works quite well in the classroom too...
;-)

Sure you don't want to use "I Am the Bread of Life"? ...the way it's sung at the parish by my house, it sounds almost like a ragtime tune!

(Note that I said "the parish by my house" rather than "my parish"...I drive half an hour to avoid that schlock!)

Mac,
You and Father should plan a pilgrimage to Chicago for All Souls' Day to attend the Mozart Requiem in d Mass.
It's thrilling.
Plus, we could go to Holy Hill, the Shrine of Max. Kolbe, and check out all the beautiful churches around here, to make it a true pilgrimage.
(Or just come for vacation - that's good, too!)

P.S. You and Father and whomever else, that is.

P.P.S. Black vestments are so yummy.

It looks & sounds wonderful. i want one too! do you have to wait until you die..shucks i'm sooo impatient..furthermore has Matt seen it yet???

Being a member of the Latin Mass Society, I carry a little red card along with my donor cards which specifies that my Requiem be said according to the 1962 rite. I share your sentiments exactly, especially after some of the shocking funerals I've been to.

I hate to be a rain on your parade, but as far as I know vernacular hymns are not permitted in the liturgy. You'll have to settle for something a little more traditional, like Fauré's Requiem Mass! (we all wish!) Don't forget the all-time greatest requiem tract Dies Irae!

My grandmother had 'Oh Mother, I could weep for mirth' at her funeral - a great one that's in hardly any modern hymn books. It took her a week to die, aged 97, and the entire family spent most of that week learning the hymns she'd chosen for her funeral!

And in case anyone asks you, I'd like 'Be still my soul' at my funeral.

Kasia, please don't say such things... not even in jest. I feel queasy just thinking about that ghastly song!!

Ma - don't tempt me! And all my holidays (I don't take many) are pilgrimages... I'm not into lying on beaches(I might get harpooned by mistake... or worse, "rescued" and returned to open sea!!)

Matt - we had vernacular hymns at the Requiem Mass I attended on Friday...

Beautiful! I love the Requiem Mass vestments and everything about it! It's a beautiful Mass. I so strongly want a Requiem Mass said for me when I die. One day, I will even put that in my will.

I have very fond memories of singing "Guardian Angel..." from school. When my sister died, I chose it for her funeral - we used to sing it together with my mum before bedtime.

If you don't know the hymn or are nostalgic (like me!), see: