I occasionally get to help out in the Sacristy.  Mostly this consists of setting up the vestments and sacred vessels after the Sunday evening Mass ready for Monday morning... an occasion of some regret, as the regular Monday morning supply priest doesn't like "fuss" - so, no amice, no maniple, no cincture, no chalice veil, no burse and no paten (he uses a "dish" instead.)
Occasionally there are little rewards, though!  Like being first on the scene to see Fr. Tim's latest acquisitions...  I spotted that the lads who serve on Saturday were going to be allowed to open the parcel of goodies, and, knowing that the lads in question were actually away at the beginning of their half term hols, promptly went in to the sacristy on Saturday morning for a nose around.
They are seriously nice vestments.
Unfortunately, this Sunday was the feast of Christ the King, so Hilda (the Sacristan) was instructed to get them out for next Sunday.
However, Fr. Tim was due to say an early Mass this morning, before leaving for the APGL Conference... and today was a feria according to the 1962 Calendar... so I asked if I should put out the green vestments...
Fr. Tim was originally going to say a votive Mass, I think, but took pity on me, and said that the new green vestments should probably get given a dress rehearsal before Sunday... 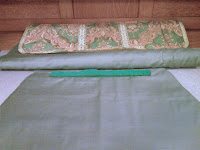 Laying out the vestments, I noticed something was missing.  It took me a minute to identify that there are usually ties for a Roman chasuble... Further exploration revealed that there was a rather bulky bit behind the front panel.  I was almost certain that these were the missing ties, but wasn't absolutely sure.
Figuring that if I didn't use sharp implements, I wouldn't be causing any major damage, I unpicked the stitches... et voilá! 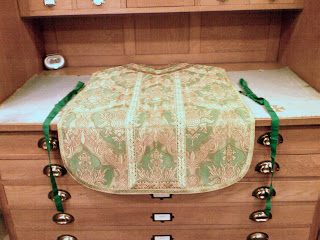 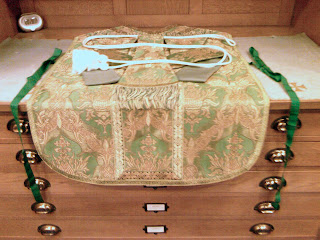 I took photos this morning at Mass, but the lighting at the Lady Altar completely messes up my mobile phone camera, so the proper photos will have to wait until Sunday after all... 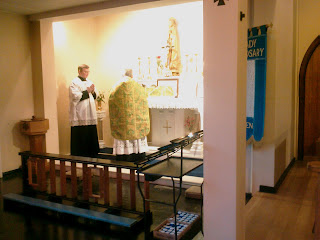 Good girl! Of course, you could have always taken it over to HEathrow to run under the XRAY machine! ;-D

Gosh, it's another month to Christ the King hereabouts ...

Fr. Tim lets a supply priest into his church who uses a "dish" instead of a paten? I am shocked, I tell you, shocked!

Gregor, supply priests are hard to find, and Fr Tim is at the seminary on Mondays...