A Treat For Our Lady's Feast Day... 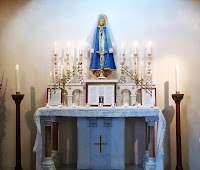 We are so very blessed at Blackfen. Not only do we have Mass in two forms of the Roman Rite (the vetus ordo and the novus ordo) but we also have a Mass most weeks said according to the Anglican Use of the Ordinariate of Our Lady of Walsingham. At the two sung Sunday Masses (one English, one Latin), we don't get the four-hymn-sandwich, but have the antiphons and the parts of the Mass sung. Our Parish Priest delivers excellent sermons, and he has written down what he wants to say, so he doesn't waffle. There is even a summary of it in the parish newsletter. He doesn't treat the congregation as if they are a bunch of nine-year-olds, but covers Church history, doctrine, moral and social teaching, and usually bits from the lives and writings of the saints and the writings or speeches of the Pope (whichever one it happens to be.) The documents of Vatican II are frequently quoted (and we get Vatican I and Trent as well, just to demonstrate the hermeneutic of continuity in action.)

We have some really skilled and dedicated servers, a talented parish choir which has an amazing repertoire (lots of people sing different settings for the Kyrie, but how many times do you hear a small parish choir also knock out the Gloria, Sanctus and Agnus Dei of Mass IV, for example?) and a marvelous team of people who clean the church and do all sorts of extra stuff in the sacristy (laundry of altar linens, mending vestments, making altar cloths) - the sort of thing that is only noticed when it isn't there.

And, as an extra-special blessing, we have Sisters who visit the parish. None of this "Nuns on the Bus" rubbish... these ones have full habits. This is such an important witness for young women and girls - the priest is an obvious sign of a vocation in the Church, but most religious sisters in parishes are no longer "visible" at first glance. Even the teaching orders have pretty much disappeared from English schools.

The Franciscan Sisters of the Immaculate often pop over to Blackfen for Mass, and on big feasts of Our Lady's they will often come along and sing the Mass propers and a motet or two. I videoed the incensing at the Offertory, and the Sisters were singing something really beautiful - I'm not sure what it is, but hopefully one of them will let me know. It's only my little mobile phone, but it still sounds awesome, so I thought I would share...


I only took a couple of photos, but you can see them here.
Posted by Mulier Fortis on 16.8.13 2 comments: Links to this post

The Feast of the Assumption of Our Lady into heaven... 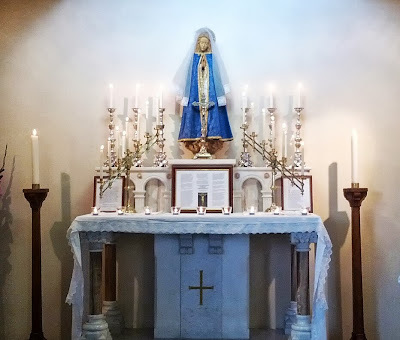 Posted by Mulier Fortis on 15.8.13 No comments: Links to this post 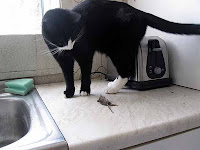 Holidays are when teachers like me get to do housework properly... or at least a little more thoroughly than during term time. Hoovering the sitting room, I discovered two dead mice under different cupboards... Mind you, it could have been worse. My friend Fitzrufus tried to give me nightmares by tweeting a link to a report of a couple who found a dead (and dessicated) cat under the floorboards.

The most upsetting thing for me was that the cat looked so skinny. I rushed off to fill up the food bowls for my two hooligans...
Posted by Mulier Fortis on 15.8.13 2 comments: Links to this post

... I videoed Furretti responding to her name (or perhaps, to be more accurate, the sound of my voice). She must have been just by the catflap when I called (the other side of a fence at the side of the building) and she either scooted under or over the fence to come running.

She then decided to go and explore somewhere else in the sunshine, and despite all my blandishments, she hasn't come home yet. Miaowrini, on the other hand, came in demanding to be fed something nicer than dry biscuits... but I didn't get that on camera...

But I'm feeling loved and appreciated...
Posted by Mulier Fortis on 11.8.13 10 comments: Links to this post