Mary and Dylan insisted that I get a "blogging exclusive" photo... So, happy to oblige, courtesy of my Android phone, I thought I'd post this one... 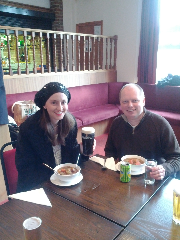 I wanted to take a photo of Trish and Phyllis who are doing the cooking for the Guild meeting. I was warned off, but was told that I could get a preview of dessert... 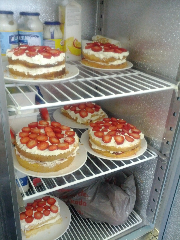 Mary O'Regan steps into the breach to speak to the Guild meeting... 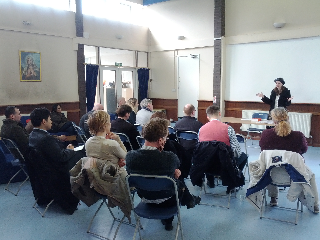 The kitties appeared to be very pleased to see me when I returned from the Faith Theological Symposium yesterday evening. Furretti wanted to curl up close, and she purred a lot. Miaowrini was also quite welcoming, but, once she realised I was in for the night, she was happy to curl up on the cat bed on top of the wardrobe.

This morning, both cats made a fuss of me.

When I returned home this lunchtime, after Mass and a chat with a friend over tea and biscuits, I found that Miaowrini had brought me a present... the living room floor was covered in feathers, and a large pigeon lay in the midst of the mess.

I'm not sure if this is a "welcome home" present, or a warning of what the cats will do to me if I leave them again... Fr. Ray Blake is celebrating the 150th Anniversary of St. Mary Magdalen, Brighton, with an impressive series of events. I am almost tempted to relocate to Brighton for a short while... though I doubt that my cats would be able to cope. Monsignor Miaowrini would probably be abducted by the first seagull she attempted to snaffle, and would be dumped mid-Channel. Monsignor Furretti would possibly die from salt-poisoning as a result of licking sea-air encrusted fur...

However, the programme of events is mouth-wateringly good. It will start off with a special celebratory Mass on 27 February, at 7:30pm. Schubert's Mass 2, Bruckner's Locus Iste and a world premiere of Tom Bennett's Tu es Petrus all feature. His Hermeneuticalness will be preaching.

There will be a blessing of the "Mother Riccarda" bus after the Sunday Mass on 4 March, and a series of talks will kick off on Friday 9 March, 2012, at 7:30pm with a talk by James MacMillan.

I haven't got much time, as someone is waiting to use the computer, and I have no idea if I'll get a chance to use it again later... but, since I'm missing my kitty cats... 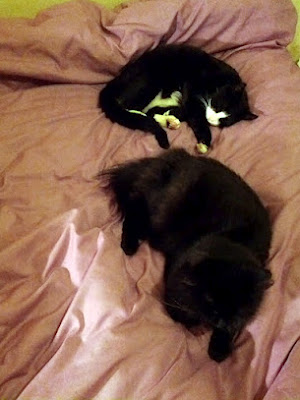 A couple of weeks ago there was an announcement about a sale of sacred vessels by the monks formerly at Ramsgate. There were serious concerns that the monks were planning to auction off some beautiful sacred vessels. The possibility of profanation had been mentioned.

Now it seems that common sense has broken out all around. The Bishops' Conference has published a Press Release to announce that the sale of these treasures will not be going ahead, and that the items will remain in Catholic hands, through a private treaty. Some items are being returned to St. Augustine's Church, Ramsgate, while others are being sent to Farnborough Abbey.

This is seriously good news. You can read the full statement here.
Posted by Mulier Fortis on 14.2.12 No comments: