Back in the mists of time when I first started blogging, I was in a distinct minority. The majority of Catholic blogs were written by men, and most were from the US. Being one of the very few British female bloggers meant that I had a higher profile than I deserved. Seven and a half years later, and I'm delighted to note that there is now a huge selection of good, Catholic female bloggers... and it's impossible to follow everyone.

However, there is one new blogger who should be flagged up as compulsory reading: Yes I'm Catholic is a blog by a young student concerned with living life as a committed Catholic, and all the issues she has to face in day-to-day situations. She includes the caveat that we should "expect controversial topics, a fair amount of teenage angst, and some mushiness mixed in with the theology."

For some reason I've yet to fathom, she refers to herself as the skinny walrus. Already she has started up a series of excellent, informative and highly entertaining posts on the subject of dating. The first in the series can be found here, and the second one has just been posted. I really wish that I had had a friend like her around back when I was a student. Do go on over and say hello...
Posted by Mulier Fortis on 25.10.13 No comments: 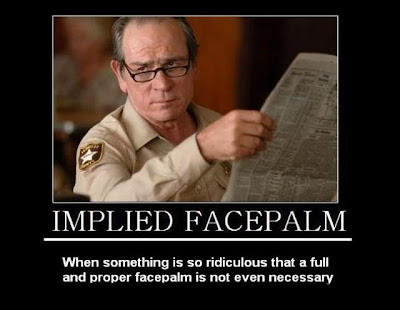 UPDATE: To be honest, I didn't realise that the letter was actually published in 2011 (as was Fr. Z's article) as it only came to my attention on Wednesday. However, even though it's an old letter, my point still stands: it should never have been published in a Catholic newspaper without some sort of correction or editorial comment...
Posted by Mulier Fortis on 23.10.13 5 comments:

Just When I Thought It Was All Over.. 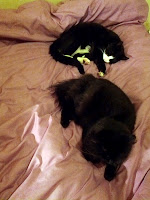 The weather took a turn for the worse a couple of weeks ago, and both cats decided that they could tolerate each other's company if it meant sleeping on a warm duvet.

Anyway, this evening I was settling down to a quiet evening's tweeting when the catflap opened, and Miaowrini announced her arrival in loud tones. Furretti got up off the laptop case and ran to investigate. I realised that something was up - Furretti tends to ignore Miaowrini most of the time. I went to see what was going on, and a present was promptly dropped at my feet... 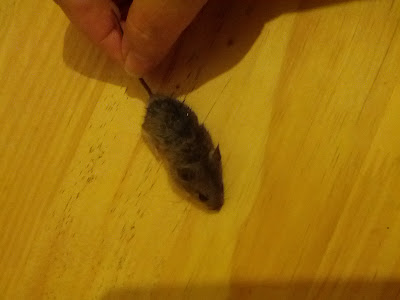 The mouse was alive, so I threw it out of my bedroom window into the grass (I live on the ground floor, I hasten to add!) After a minute's stunned inactivity, the mouse ran off. Miaowrini and Furretti are now sulking...
Posted by Mulier Fortis on 23.10.13 No comments:

I'm still incredibly busy, but I do like to try and liven up my Science lessons with a little light entertainment. A few years ago - in the era before YouTube - Tom Lehrer's Periodic Table Song was a rarity, because very few teachers could sing it right through (I did have one colleague who went from class to class as a favour to all of us!) Now everyone knows it, and it's rather dated, not least because 15 new elements have been disc-aaar-vared (and details duly sent to Haaar-vard.)

I found a catchy (aka irritating) song which goes through the first ten elements, and one of my Year 9 classes has started to join in (and even ask for it as a "treat" at the end of lessons!) However, I think that the following video trumps the lot, if only because of the animations. I'm tempted to try and learn it myself...