Time For A Reality Check...?

After Professor Tina Beattie signed a letter in The Times which was at variance with Catholic teaching, her invitation to speak at Clifton Cathedral was withdrawn. Given that Prof. Beattie has never made any secret of her opinions, one might wonder why she was asked to speak in the first place.

Be that as it may, it was encouraging that Clifton diocese had seen how untenable it would be to have such a speaker scheduled. Prof. Beattie explained to the Catholic Herald that she was saddened by the cancellation, but that, after discussion, she understood it and accepted the reasons for it.

The Pill editorial has allowed itself an interesting slip in its haste to rush to Prof. Beattie's defense.

After noting that the letter to The Times distorted the words of Cardinal Hume in order to make it appear that SSM was not incompatible with Catholic teaching, and suggesting that the Bishop of Clifton might have thought this indicated a lack of good faith, the editor goes on to state that, "...apart from that consideration... the cancellation of the lecture was indefensible."

Sorry? Run that by me again...

A letter, signed by Prof. Beattie, deliberately uses a selective quote from Cardinal Hume to bolster the idea that it is possible to accept same-sex marriage as not being contrary to Catholic teaching, (because it's all about love, really...) and Professor Beattie says that she stands by the contents of the letter... and then The Pill tries to suggest that the Bishop's decision is indefensible???

I don't think so. As Leutgeb has pointed out, no other organisation would accept this level of dissent from an employee or member.

What is indefensible is the fact that The Pill can write this tripe and still claim to be Catholic.
Posted by Mulier Fortis on 15.9.12 9 comments:

Exaltation Of The Holy Cross... The Feast of the Exaltation of the Holy Cross was marked in fitting style at Blackfen. The Sodality of the Five Holy Wounds had arranged to have a Missa Cantata, and there was a bit of a social event afterwards...

It's hard to believe that five years have passed since Summorum Pontificum. In one respect, it feels as if no time at all has elapsed. As the incomparable Fr. Z keeps reminding us, there is much still to do, particularly with regard to the training of priests and seminarians in the Extraordinary Form. But, brick by brick, progress is being made.

In another way, the five years seems so long - it is hard to remember what it was like before Summorum Pontificum... though, on reflection, that might not be the case for anyone battling to get the Extraordinary Form introduced into their parish. But don't stop battling... it really is worth it.

Anyway, to celebrate the anniversary in the approved manner, we had a little champagne... A few of us couldn't resist teasing Tom, whose youngest baby is being baptised tomorrow. Fr. Tim asked if he'd sorted out who would do the first reading, and whether someone had written the bidding prayers... ...Tom was rendered totally speechless at the thought, and I had to take a photo! (The baptism will be in the Extraordinary Form, and so there aren't any readings or bidding prayers!)
Posted by Mulier Fortis on 14.9.12 No comments: 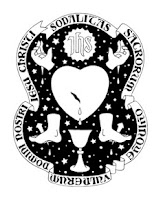 The Sodality of the Five Holy Wounds is having a Missa Cantata at Our Lady of the Rosary church, Blackfen for the Feast of the Exaltation of the Holy Cross, followed by a shared supper. Everyone is welcome. In case you need a further excuse to celebrate, it's five years since Summorum Pontificum...

I was planning on bringing sausage rolls until I realised that it was Friday, so that had me stumped for a moment. Not being a good cook, I'm not really up to doing anything clever with fish. I might try to get some smoked salmon and cream cheese, but please don't tell the Monsignori, or I'll not be able to leave the house...

The dates for the Sodality meetings and Masses for the next year are now published on the Sodality blog's sidebar, so do check it out.
Posted by Mulier Fortis on 10.9.12 1 comment:

A Picture Speaks A Thousand Words... So, 'nuff said!  Twitch of the mantilla to the wonderful Sisters of the Gospel of Life.
Posted by Mulier Fortis on 10.9.12 No comments:

Happy Birthday To Our Blessed Mother...!

Yesterday was the Feast of the Nativity of Our Lady. To celebrate, one of our parishioners and her sister made a new cape for the statue of Our Lady...