On The Horns Of A Dilemma...

The Bishops of England & Wales have declared that Catholics should abstain from meat on all Fridays of the year. This is a very commendable thing for them to have done.

This is rather crucial, as I'm going to a party tomorrow night, and I don't like vegetables... or fish... and I suspect that most of the nibbles will be meat-based...

Does anyone know the Canon Law regarding this stuff...?
Posted by Mulier Fortis on 30.12.11 15 comments:

Last year I found out about the Epiphany blessing of chalk for use on the doorframes... but only after the Feast of the Epiphany.

This year, the PP has put a note about it in the parish newsletter, and on the website. This is "A Good Thing" - as Leutgeb would say (with capital letters) - as I do believe we should get as many blessings as possible through the year. They were, after all, put there for a reason. Life revolved around the Church, and the Church, in her turn, reflected life in the cycle of the liturgical year.

I just read, courtesy of the inimitable Fr. Z, that there is a blessing of wine which is traditionally carried out after Mass on the Feast of St. John.

Unfortunately, Mass was this morning at 10am. I was there, but, not knowing about the blessing of wine, I didn't have any with me. I shall add it to my little list for next year...
Posted by Mulier Fortis on 27.12.11 8 comments:

I was on sacristy duty after Mass, and His Hermeneuticalness asked after the health of Monsignors Miaowrini and Furretti. He isn't normally so solicitous of their well-being, and I was instantly suspicious. Sure enough, he pointed out that as the enrolment happened after the sermon, he had forgotten to pick up his maniple when he returned to the altar.

Everyone knows that, when you celebrate Mass without a maniple, God kills a kitten.*

After all, last year Fr. Tim said Mass in Rome without a maniple, and Cardinal Catzinger (Miaowrini's predecessor) died. I did happen to mention that, as both cats were now well over a year old, they technically didn't qualify as "kittens."**

However, I decided to make a bit of an extra fuss of the kitty cats when I got home, and cracked open the packet of smoked salmon I had bought.

Monsignor Furretti was very impressed by the tidbit, and, in her eagerness not to miss a single morsel, she went cross-eyed... I tried to take another photo, but she wasn't going to pose for any camera. Not when smoked salmon was being proffered. Furretti just moved too quickly, and the photos were just very blurry... Miaowrini was a little more relaxed, though equally ecstatic with the offering of salmon. She just closed her eyes and nibbled enthusiastically... so enthusiastically that I nearly lost fingers... And, when I put down a plate of the salmon slivers, the cats decided to tolerate each other - neither wishing to cede her place to the other. Normally they wouldn't be seen dead eating from the same bowl... **His Hermeneuticalness will be getting the vet's bill if anything does happen...
Posted by Mulier Fortis on 26.12.11 1 comment:

Thanks to Fr. Bernard McNally and Rev. Michael Baldry, we were able to celebrate a Solemn High Mass for Christmas, actually at midnight. Mass was preceded by favourite carols, and a printed sheet ensured that we didn't have to endure any of the politically correct shenanigans introduced by music publishers.

Mass itself was wonderful. I know, I know... Mass is always wonderful, and totally awesome (yes, God became physically present on the altar yet again, like He does at every Mass...) but Midnight Mass is that bit extra-special. After all, there is that whole "entering our world in the silent watches of the night" thing going on... ...the sacred ministers kneeling during "et homo factus est" in the Creed just sends goosebumps down my spine in a very special way at Midnight Mass...
Imagine... Our Lord and God actually consenting to become a baby. To become so vulnerable for our sakes. To rely on fallible human beings for everything. Now, if you wanted to make up a religion, would you ever come up with an idea as preposterous as that?
...and then, to crown it all, our God appears under the form of bread and wine, called down (almost ordered to become present) by the words and actions of more fallible human beings, namely His priests... 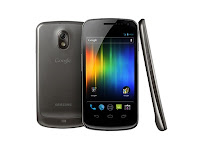 Yes, it really has been two years since I last upgraded my phone. Well, ok, I'm short by a few weeks, but my upgrade was due early, according to O2, and who am I to disagree?

I had only two ideas when I went phone shopping. The first was that I never ever want to see another iPhone. I like the phone, and I'm (almost) certain that the latest one is streets ahead of the 3GS model I have had for the past two years. The deal-breaker is, quite simply, iTunes. It is clunky, and slow, and a real pain in the posterior. Yes, I'm running it on a PC and not on a Mac... but iTunes is supposed to be designed to run on both.

Unfortunately, syncing my iPhone depended on the use of iTunes. It became such a hassle that I avoided syncing, which meant that, on more than one occasion, I didn't have the latest addresses and phone numbers on my phone. I also found that, if I had updated a couple of addresses on my phone and a couple on my computer, the system couldn't cope, and it went with the most recent update - thus losing important contact information.

On more than one occasion iTunes froze my phone completely, necessitating a trip to the Apple shop in Bluewater. The last time it happened, the staff had problems re-booting my phone back to factory settings...

The other idea I had when looking for a new phone was that I didn't want a Blackberry. Not after the whole Blackberry system went down for three days. Blackberry Messenger is, IMHO, the Betamax of the text messaging world...

After having a little look in the O2 shop, I realised that there really wasn't any choice. I wanted Android as an operating system. There were many more phones running Android than the last time I was in the upgrade market, but the latest version, Android 4.0 (the famous "ice-cream sandwich") only runs on the Samsung Galaxy Nexus at the moment. Given that this upgrade was going to involve another 24-month contract, I wanted the most recent version available.

The Galaxy Nexus is larger than the iPhone - of course, I'm talking about my old iPhone - but the Nexus is thinner and lighter. The home button is "missing" on the front - it appears as a touch-screen button once the phone is switched on - this is taking me a bit of time to get used to, as is not having the power switch at the top.

I'm still getting used to the minimalist feel of the Nexus - the main touch-screen buttons, always available when the phone is on, are home (goes to the home screen), back (goes to your last viewed item) and recently viewed. The last option means that you can have lots of apps open at one time, but I haven't found any real use for it, partly because the only apps I've been using so far are the internet, Tweetdeck, Gmail and my contacts. As I get more apps, I suspect this will get to be more useful...

I've had lots of fun updating my contacts. First I had to export all my contacts over from Microsoft Outlook - another clunky program I will be more than happy to see the back of. Then I weeded out the obvious duplicates - Google does most of the hard work, but there were still items which I had to check and confirm manually. I spent far more time than I should playing with photos - I allowed my geeky nature to indulge itself to the fullest by hunting out photos of people who haven't assigned themselves a photo - basically it makes my phone's address book look much prettier.

There are one or two apps which I shall miss from my iPhone - iPieta being the main one (though I see that there is a variant coming out for Android) - but I mainly used my phone for messaging and checking the internet... and phoning, of course - so hadn't downloaded many apps anyway.

There are lots of features I haven't had time to explore yet - such as the voice-activated search option - and I think that I shall have a great deal of fun exploring... so, if you'll excuse me, I have a phone to go and play with...
Posted by Mulier Fortis on 25.12.11 7 comments:

A Blessed Christmas To You All... 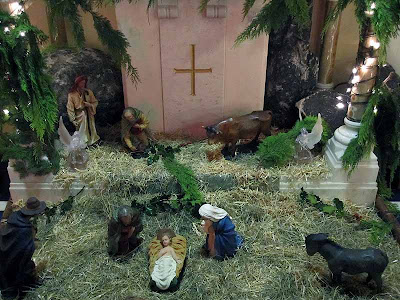 The photo is from last year's crib at Our Lady of the Rosary, Blackfen. I hope to get some photos for this year's crib after Midnight Mass...
Posted by Mulier Fortis on 25.12.11 2 comments: