After my little rant yesterday about the rubbish portrayed as Catholicism by the mainstream media, and my efforts to avoid the sin of anger being thwarted by a particularly beastly opinion of the Holy Father's legacy given by Bishop Kieran Conry, I thought I might redress the balance a little by posting a few good reports from the blogosphere.

First of all, I rather appreciated this little video clip of an interview with Cardinal Arinze shortly after the announcement was made.

This is the sort of response one expects from a shepherd of the Church, and, dare I say it, Bishop Conry would do well to take note. I've had a soft spot for Cardinal Arinze ever since he offered to give a turkey to anyone who could show him where in the documents of Vatican II the removal of altar rails was decreed.

Confirmation of my view that the majority of mainstream journalists get it so very wrong was given by Tim Stanley, one of The Telegraph's bloggers. He sounded almost as annoyed with the MSM's approach to Catholicism as me. I think one of my favourite lines has to be "So The Guardian’s ideal Pope is someone who isn’t a Catholic."

And finally, at least, for this post (there are plenty of other excellent tributes to the Holy Father) there was a really excellent message from Fr. Julian Large, Provost at the London Oratory. I actually laughed out loud when I read the caveat to his thoughts on the significance of the lightning bolt which struck St. Peter's:


"The Provost of this Oratory has not been invested with extraordinary prophetic powers, and his knowledge of geophysics is slight; so anything that he might have to say on the subject of thunderbolts might safely be taken with a scruple-spoonful of blessed and exorcised salt.."

There is a great wealth of good material on the blogosphere. You just have to practise custody of the eyes...
Posted by Mulier Fortis on 15.2.13 No comments: Links to this post

I know I shouldn't do it.

I know I should resist temptation, but I am fallible.

Every time the Church hits the news, I promise to avoid all occasions of sin - namely reading or watching anything in the mainstream media. I can guarantee that the Church's teachings and the Holy Father will be misrepresented, scorned and ridiculed... If I could persuade Paddy Power to take my bet, I would make a fortune... except that even they might notice that it's a dead cert.

One can almost understand an atheist or non-Catholic article to get things wrong - I say "almost" because responsible journalism used to involve checking one's facts before publication. But what makes me really angry is when the rubbish being spouted is given credibility because it is from a Catholic.

Ex-nuns and laicised priests are particular favourites for the MSM. People who write for that dreadful rag, The Bitter Pill (which ought to be prosecuted under the Trades Description Act) are also seen and heard from quite frequently. And any Catholic who has declared publicly that the Church is "wrong" on this or that doctrine is bound to come crawling out of the woodwork sooner or later (most probably sooner!)

With the Holy Father's abdication (or resignation, or renunciation, or whatever the correct term should be) on Monday, I had done quite well. I stuck to The Catholic Herald, the occasional piece in The Telegraph (only if the title seemed fairly positive) and the Catholic blogosphere.

I had done quite well, that is, until this afternoon, when a friend posted a link onto my timeline on Facebook.

The Bishop in question is Bishop Kieran Conry. I know that he is no fan of the Holy Father (his comments about the implementation of Summorum Pontificum make that clear), but one does expect a sort of statesmanlike attitude towards the Papacy from one's bishops. A degree of respect and diplomacy when speaking of the decisions of the Pope... you know, the sort of stuff which was actually demanded of the faithful by Lumen Gentium:


"...In matters of faith and morals, the bishops speak in the name of Christ and the faithful are to accept their teaching and adhere to it with a religious assent. This religious submission of mind and will must be shown in a special way to the authentic magisterium of the Roman Pontiff, even when he is not speaking ex cathedra; that is, it must be shown in such a way that his supreme magisterium is acknowledged with reverence, the judgments made by him are sincerely adhered to, according to his manifest mind and will. His mind and will in the matter may be known either from the character of the documents, from his frequent repetition of the same doctrine, or from his manner of speaking." (LG n. 25)

I was under the impression that Lumen Gentium was one of the documents actually produced by the Second Vatican Council. Obviously the good bishop has only read those bits which count as "reforming ideals."

Fortunately for my blood pressure, the majority of the article is behind a subscription paywall. Therefore I can't read the hatchet-job he has probably done on the Holy Father.
Posted by Mulier Fortis on 14.2.13 13 comments: Links to this post

Words I Never Expected To Hear At Blackfen...

This has been a week of momentous happenings.

Asked whether he thought a visit to the pub might be in order after the evening Mass, Blackfen's Senior MC was actually heard to say that he didn't think it was "quite in the spirit... "

Next thing, he'll be quoting the Spirit of Vatican II.

I don't think I can take many more of these shocks...
Posted by Mulier Fortis on 13.2.13 1 comment: Links to this post

Further Reactions To The News... 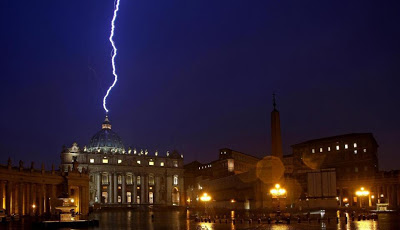 I'm tempted to say that it looks as if even Our Lord was thunderstruck at yesterday's announcement...
Posted by Mulier Fortis on 12.2.13 1 comment: Links to this post

The news that Pope Benedict XVI is to abdicate in just over a fortnight has left me feeling rather numb and somewhat bereft.

It is understandable that the Holy Father finds it a dreadful strain, especially at his advanced age, and obviously this is something he will have prayed about and reflected upon for some time. He will, one day, be held to account for his stewardship of the Church - a truly unenviable position. And it seems that he deems it best to hand over that stewardship swiftly, rather than allow a prolonged period of increasing ill-health and fevered speculation about his successor.

It seems that it was a shock even to those closest to him. The Holy Father will be the first Pope in 600 years to renounce the Papacy.

Nevertheless, the Church does not have "policies" or "programmes" which change with the shifting winds of popular opinion. She teaches Truths which endure for eternity. So the Press can save its breath and stop speculating on whether the new Pope will "allow" female ordination, gay "marriage," contraception, and such like. He won't.

Christ promised that he would be with his Bride, the Church, to the end of the ages, and that the gates of hell would not prevail against her. We need to demonstrate our trust in that promise.

And we should pray for our great Holy Father Pope Benedict XVI... and pray for his successor.
Posted by Mulier Fortis on 11.2.13 1 comment: Links to this post

It seems that Miaowrini is finally learning some manners.

Tonight she brought in a mouse, and before tucking in, she laid it down very carefully in her food bowl... Despite appearances, the mouse was still alive, and, since I didn't fancy the idea of listening to it being slaughtered in the middle of my beauty sleep, I felt obliged to rescue it.
Posted by Mulier Fortis on 11.2.13 4 comments: Links to this post

A Typical Sunday In Blackfen...

One is never bored at Blackfen.

The parish is a lively one, and there is usually something going on. Of course, there are only 52 Sundays in the year (give or take) and so the calendar does occasionally get a little full...

This morning was an example. First there was the 9am English Mass with children's liturgy and the children's choir chanting things like the Introit and singing the Mass propers. Directly after that, there was a Religious Sister and a Lay Brother from an Orthodox convent in Belarus selling icons and stuff to raise money for their work looking after orphans and disabled people. I had been tasked by Annie Elizabeth to get something "nice" which meant that I was in absolute agonies in case my ideas of "nice" didn't pass muster. I took comfort from the fact that directly after I nabbed one of the icons, several other people came up and asked about the same one. Meanwhile, the altar servers were changing various things over from green to purple as it was Quinquagesima in the old calendar, as well as setting up the gradines and arranging the altar for Mass to be celebrated ad orientem. Music for the usus antiquior Mass also had to be laid out.

It goes without saying that Mass was wonderful. It's almost the oasis of calm in the middle of the maelstrom. Even so, the Confessional door is opened and shut so often that I have occasionally wondered if a revolving door might help.

No Baptisms this week. Gosh, the Parish Priest is slacking! Tidying up after the Mass and setting up for the Novus Ordo evening Mass is pretty routine. All the servers help (though some of the younger ones have been known to try to escape). Today, things were a little more hectic, as the Religious Sister and the Lay Brother were busy selling more of their icons, and that meant that rather more people than usual were in the Small Hall.

The choir practice was therefore held in the little room with all the cupboards which is between the church and the Small Hall. I know this because I fell over Leutgeb putting them through their paces when I was getting stuff from the cupboards... Sadly, I had one of my frequent blonde moments, and managed to press the wrong button, so the video of the operation of the lifebelts didn't record. I did manage to get a photo or two of the aftermath... I believe that the parish club was preparing to watch some rugby match this afternoon - something to do with six nations. I wasn't paying attention because, thanks to the eagle-eyed Zephyrinus, I discovered that I had yet another flat tyre.

At least this time I could wait for the breakdown services in the comfort of the parish club...
Posted by Mulier Fortis on 10.2.13 3 comments: Links to this post