As I write, the case of little Alfie Evans is reaching a heart-wrenching climax... according to the latest tweets, Alfie has been granted Italian citizenship, and the Italian ambassador has reportedly said that any attempt to remove the ventilation tube would be considered as the murder of an Italian citizen.

Alfie was brought to Alder Hey Children's Hospital in December 2016, after suffering seizures. The condition affecting the toddler has not been diagnosed, other than to say it is a degenerative neurological condition. The hospital authorities ruled that there was catastrophic degradation of Alfie's brain tissue, that he was in a semi-vegetative state, and that further treatment was futile, inhumane and unkind. His parents disagreed, saying that Alfie was responsive. The hospital countered that the "apparent responsiveness" was merely the result of spontaneous seizures due to touching.

Earlier this year, Mr Justice Hayden ruled in favour of the hospital, saying that it was in Alfie's best interests to have ventilation withdrawn, and to be allowed to have peace, quiet and privacy, and he set a date for the withdrawal of the ventilation tube. 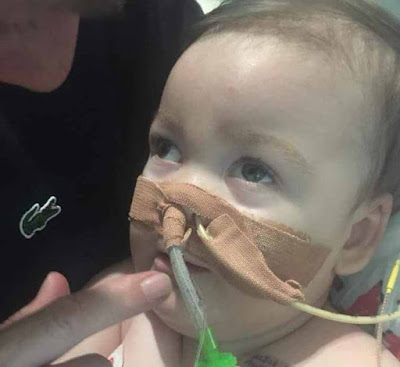 Alfie's parents, Tom Evans and Kate James, have been fighting to keep Alfie alive ever since.

Up to this point, the story is tragic for all concerned, but not unusual. Sometimes, treatment which is burdensome for a patient and not likely to help has to be withdrawn. It's awful, especially when the patient is a little child, but sometimes it really is in the best interests of the patient, to avoid further pain and suffering.

However, Alfie's story has now started to take a more sinister aspect. For a start, Alfie is not in pain. He appears to be growing. And, when not being heavily sedated by the hospital, he appears to be responsive.

By dint of their constant campaigns through social media, Alfie's parents managed to attract the attention of an Italian hospital, the Bambino Gesu, who offered to take over Alfie's palliative care, including artificial ventilation, for the remainder of his life. Tom Evans had an air ambulance standing by, with staff capable of looking after Alfie's needs during the transfer. However, Alder Hey prevented Tom from taking his child out of the hospital, calling police to block the exits and warning him that he would be arrested for assault if he attempted to take his son away.

At the same time, the hospital and Justice Hayden, maintained that Alfie's "best interests" were for the ventilation tube to be removed. The pain and discomfort that would be caused by the removal of the ventilation tube (basically suffocating Alfie to death) would require the administration of two painkilling medications.

Alfie is not currently experiencing pain. The sedation would, by depressing his breathing still further, effectively kill him. But, according to the courts, it is in Alfie's "best interests" to remain in the hospital, even though his parents want to take him to a different hospital.

Alfie's parents are fighting heroically for the life of their son. They have pointed out that, when the sedation being given by Alder Hey has been reduced, Alfie appears to be much more responsive and alert. In a final attempt to allow Alfie to leave Alder Hey, he has been granted Italian citizenship, and the Italian embassy is trying to arrange his "repatriation."


UPDATE: In the past hour, despite the ongoing legal challenge from the Italian embassy, it seems that the staff at Alder Hey have removed the ventilation tube from Alfie Evans. He is struggling to breathe, but is still alive. The hospital have reportedly refused to allow oxygen to be administered, and have arranged for thirty police officers to be stationed outside Alfie's room. Whose best interests are being served now?

This whole case stinks. There seems to be no rational reason why Alfie should not be taken out of hospital by his parents. Even if there is no hope of recovery for the toddler, Alder Hey lose nothing by allowing him to go elsewhere to die. Perhaps they are afraid that Alfie will actually live if he is treated elsewhere, perhaps despite being severely disabled, and nevertheless demonstrating an ability to enjoy life.

The intransigence of medical staff and Justice Hayden, who appear to be absolutely determined that they will not be thwarted in their original decision seems almost diabolical.

It is almost as if Alfie Evans is a test case, in much the same way as happened with Anthony Bland in 1993, when it was decided to obtain the legal ruling that food and water administered through feeding tubes constituted "treatment" and as such could be withdrawn if it was deemed to be in the "best interests" of the patient. Since then, the diagnosis of persistent vegetative state has not been the only one to incur this withdrawal of food and water.

As predicted at the time, now it seems that any elderly person who needs intubation for food and fluids is in danger of having this "burdensome treatment" withdrawn "in their best interests" unless they have a relative able to fight for them. Perhaps the case of Alfie Evans is the same thin end of the wedge - if a child is severely disabled, ignore the parents' wishes and allow the court to decide that the end of their life is in their "best interests."

Pray for everyone involved in this awful scenario.
Posted by Mulier Fortis on 23.4.18