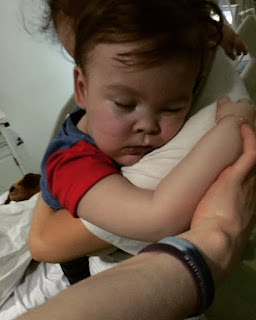 Last night I blogged about the treatment of Alfie Evans (or lack of it) at Alder Hey Children's Hospital.

As of 11am this morning, Alfie is still breathing unassisted. That means that he survived for 13 hours longer than the doctors said he would. During the night, the toddler was reportedly being given mouth-to-mouth by his parents, as he didn't appear to be getting enough oxygenation - his fingers were going blue - and the hospital authorities deemed the provision of oxygen through a mask to be "treatment" and all treatment had been withdrawn by order of the courts. They even prevented his parents from giving oxygen to their son.

The last-minute bid to stop removal of Alfie's ventilation tube by granting him Italian citizenship was dismissed by Mr. Justice Hayden, who said that Alfie was obviously a British citizen as he was habitually resident in the UK, and therefore under the jurisdiction of the High Court.

It's difficult to get reliable updates, as Twitter is awash with retweets of old information, and the mainstream media only now appears to be reporting on Alfie's case - but again, with old information. From the latest post on the Facebook page for Alfie's Army, it seems that, sometime during the night, the hospital decided that they would, after all, allow oxygen and water to be given.

From this, it is obvious that the doctors were wrong when they said that Alfie was too brain-damaged to breathe unassisted for more than three minutes. The decision of Mr Justice Hayden to allow the hospital to remove ventilation was obviously based on the incorrect "diagnosis" given by the doctors. Despite this, it seems that the authorities are still maintaining that they know what is in Alfie's "best interests" as the parents are still unable to take Alfie out of the hospital and transfer him to Italy.

The main result of this whole sorry episode is to highlight what some of us have suspected for some time: parents have no rights when deciding what is in their child's best interests if the state disagrees with their opinions.
Posted by Mulier Fortis on 24.4.18