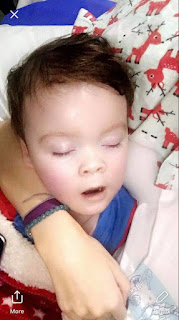 “It is better that one should suffer than that many should be corrupted. Consider the matter dispassionately, Mr. Foster, and you will see that no offence is so heinous as unorthodoxy of behaviour. Murder kills only the individual -- and after all what is an individual?" With a sweeping gesture he indicated the rows of microscopes, the test-tubes, the incubators. "We can make a new one with the greatest ease -- as many as we like. Unorthodoxy threatens more than the life of a mere individual; it strikes at Society itself," he repeated.” Aldous Huxley, Brave New World, 1932.

For Alder Hey Children's Hospital to continue to fight against Alfie Evans' parents desire to take him abroad for treatment, something of an ideological nature must be at work.

In 1993, Anthony Bland was diagnosed as being in a persistent vegetative state following injuries sustained in the 1989 Hillsborough disaster. Because the provision of artificial nutrition and hydration was, at that time, deemed to be basic nursing care rather than treatment, the hospital went to court to determine whether this could be considered to be treatment, as the provision of treatment, if not deemed to be in the patient's best interests, could be stopped.

Anthony Bland was not dying. He was not responsive, but he was not dying. Neither was he in pain. However, when his food and water were stopped, it was necessary to give morphine to relieve the pain he experienced while being dehydrated and starved to death.

Since this landmark case, removal of artificial nutrition and hydration of patients who are deemed to be "beyond treatment" has become more and more common.

Newborn infants with severe disabilities have also, under NHS guidelines, been "allowed to die" by not providing basic care... with the cooperation of the parents and doctors (who, no doubt, said it was in the child's best interests.)

When Alfie Evans was deemed to be profoundly brain damaged due to an undiagnosed degenerative neurological condition, the hospital authorities proposed removing the artificial ventilation. This would, in their opinion, result in Alfie's death in a very short time, probably a matter of minutes. However, his parents disputed this cessation of treatment, maintaining that their son was responsive (when not under heavy sedation) and not in any pain.

The hospital immediately sought to have Alfie's "best interests" determined by someone other than the parents, and arranged to have a court order made out to that effect.

Such determination to see the toddler die, despite other medical provision being made available elsewhere, suggests very strongly that this was intended to be a test case, a precedent in law.

In other words, a profoundly disabled child is a burden on the parents and especially on the State. It is therefore better to "allow" the child to die. If the parents do not agree, then the responsibility for the "welfare" of the child must be removed from them and given over to someone appointed by the State. The State will therefore be able to ensure the child dies sooner rather than later.

Unfortunately for the hospital, not only did the parents fail to follow the expected narrative, fighting tooth and nail for the survival of their son, but Alfie himself failed to follow the path mapped out for him, and he managed to continue breathing on his own.

The total intransigence of the hospital authorities is breathtaking. Despite the baby still managing to cling to life for nearly 48 hours after ventilation was removed, despite a hospital being on standby in Italy offering care for as long as Alfie needs it, despite specialised transport being on standby to take the baby, and despite all of this being available at no further cost to the NHS trust, they have chosen to return to court (hardly a cheap option) in order to oppose the toddler's removal from Alder Hey.

This is too irrational to be just about the treatment of one child. It just doesn't add up. This was meant to be another stage in the push for euthanasia to be seen as a valid and sensible choice... and one chosen by the State for individuals no longer deemed to be "useful."

At this moment, 5:40pm on Wednesday 25th April, Alfie Evans is still clinging to life, and the Court of Appeal is deciding whether Tom and Kate can take their son to Rome.

UPDATE: 7:17pm Wednesday 25th April 2018. The Appeal was rejected, as "nothing has changed." It seems as if the State cannot (and will not) allow any defiance.

Pray for Alfie Evans and his family. But more importantly, pray for our country which has not only forgotten its Christian roots, but has forgotten its basic humanitarian instincts.

I cannot state loudly enough, how appallingly 'EVIL' the Alder Hey Hospital Administration and the Courts in London, England have been, and STILL ARE, in this situation concerning this young couple and their young child!! In particular, I find it to be very confusing -- and HORRIFYING -- that a people who SAW and EXPERIENCED the HORRORS perpetrated on humanity by Adolf Hitler; would NOW enact Laws to REMOVE PARENTAL RIGHTS -- in favour of KILLING A 'DISABLED CHILD'!! My heart goes out to this young couple and their son. I pray that the Lord, Jesus will perform a ANOTHER miracle for this child and his loving parents! 'Christian' believers in London: RISE UP, AND FIGHT FOR THIS BOY'S LIFE -- AND FOR HIS PARENTS' 'RIGHTS' TO MAKE DECISIONS FOR HIM!! My thoughts and many prayers are WITH them being granted 'leave' to go to Rome!!! May God bless them, and everyone who speaks up FOR them! DO NOT LET THIS EVIL STAND in your country!!