Learning Something New Every Day...

Until three years ago I lived in London. I had read about fog (particularly the old pea-soupers) but had never really experienced it as described in Benson's Mapp and Lucia or King's The Fog... I didn't appreciate how quickly fog could descend, and how thick it could get.

Living across the road from the beach means that, since my relocation, I have had ample opportunity to experience "proper" fog. I love it - especially the way it deadens sounds... everything goes so quiet... and watching a bank of fog approach over the water is really fascinating! And then there is the disconcerting (and, to me, thrilling...) experience of being unable to see what is just the other side of the road... or even as far as the waterline...

Zephyrinus was visiting the other day  (Fr. Finigan was offering a Requiem Mass for a friend of his) and he explained to me that this type of fog was called a "sea fret," a term I'd never encountered before.

And so, to consolidate my newfound knowledge, I decided to post a couple of pictures of the sea fret I encountered on Thursday...

For comparison, this is the same view, minus fog... 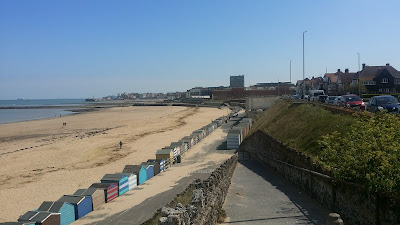 So Fret, So Good.