On Sunday afternoon, as it was Rosary Sunday, we had the recitation of the rosary, a Marian Procession and Benediction. I was determined to get some good photos, especially of the statue of Our Lady - I thought that the ones I took on Saturday suffered from poor lighting arrangements! 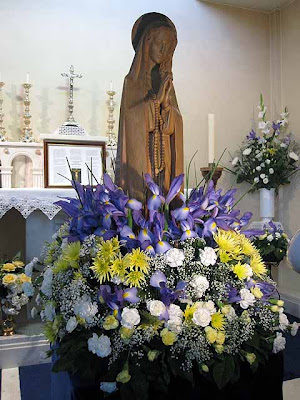 It had rained pretty steadily all morning, culminating in a real downpour just before the Marian Procession was due to start, and that put a lot of people off. Several families were away at various events as well, so numbers were rather low. I had visions of the procession having to stay inside, but it seems that Our Lady wasn't too keen on that idea. The rain suddenly stopped, and, although it didn't happen in time for the photos, the sun came out for a while. 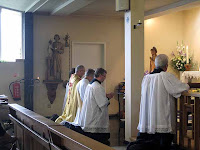 We started off with a hymn and the recitation of the rosary in front of the statue at the Lady Altar. I'm still using crutches to get around, although I can hobble about without them, the damp weather is making everything much more painful. I also suspect that I wrenched my knee a bit when carrying Sylvester to the vet - he weighed around 7kg, which is rather a lot of moggy to carry, even without a dodgy knee... As a result, I had taken the trouble to position myself carefully so as to get a clear view of the statue (there is a rather inconvenient pillar which gets in the way if I sit in the wrong position) as well as being able to get photos of Benediction, without having to change pews. Unfortunately, the best-laid plans of mice and men and all that... one of the servers needed to kneel at the main altar rail... completely blocking the view. If one of the younger servers had been there, it wouldn't have been such a problem (they're shorter!) I had to use the wonders of photoshop to compensate... I do hope that Stanley won't mind being photoshopped out... 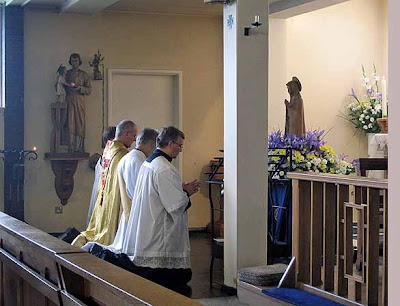 I do love photoshop... Anyway, that was only a minor blip. After the rosary, Fr. Tim recited a prayer and then some ladies from the parish Union of Catholic Mothers carried the statue out of the church... 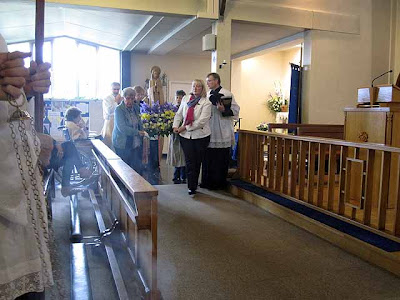 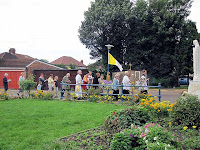 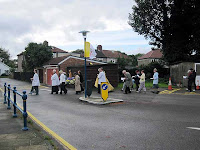 When the statue of Our Lady was returned to the Lady Altar, we then had Benediction at the High Altar. There was a little bit of a delay while the candles were lit... 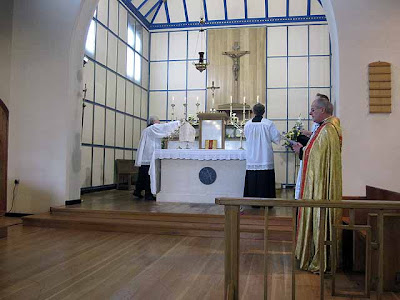 Then Exposition of the Blessed Sacrament... I don't know why, but I always find the bow at the phrase veneremur cernui (from the Tantum ergo) very moving indeed - which is why it's one of my favourite shots... 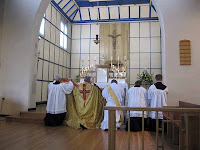 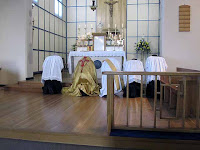 We chanted the Litany of Loreto - I posted a video of that before; then Fr. Tim recited the longer prayer for England - the one which nearly made him blub. I guess facing ad orientem helps at times like that! After that, we received Benediction itself... 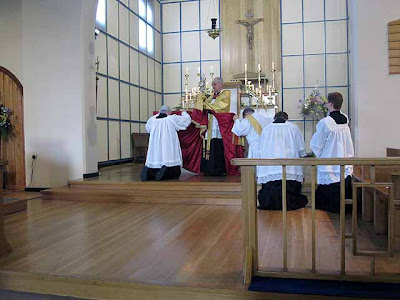 After the Divine Praises, Fr. Tim went back to the Lady Altar for the Salve Regina. 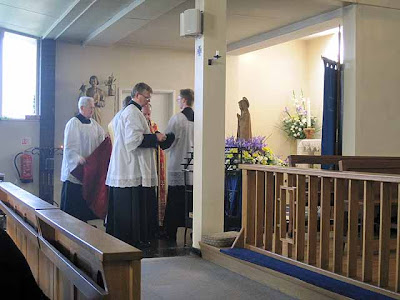 The whole thing was extremely moving - we need more devotional processions! I can't wait until Thursday - the Feast of Our Lady of the Rosary!
Posted by Mulier Fortis on 4.10.10

Just beautiful!
We had the blessing of Roses on Sunday with the Litany of Our Lady (in Latin) and the Salve Regina.
We're one in the Lord!!