How To Be Patronising, In One Easy Lesson... 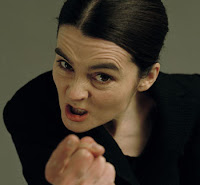 I'm having a rant here. I've been seething for a while, and I need to share...

A little bird told me that a few priests commented unfavourably on the Holy Father's visit to the UK.

"Oh yes, it was a success... but it was too dominated by men... there weren't enough women involved..."

My first response was to utter "What the..." and then realise that the rest of that phrase was unsuitable... I was reduced to spluttering incoherently. What I wanted to say was that the statement was unbelievably patronising. On several counts.

Firstly, if it was a reference to the fact that the concelebrants were all male, well durrr! That's what happens when you have an all-male priesthood. Why should women be up there on the sanctuary if they are not fulfilling some liturgical function? Are you trying to suggest that there should be a few "token" women there, so that we don't feel left out??

Secondly, did you not notice all the serviettes, women readers, women bringing the gifts for the Offertory, women accompanying celebrants who were distributing Holy Communion? Is Carol Vordeman not a woman? (I believe she was a compere for one of the events, I forget which.) Do all those women not count?

What about all those women who turned up to the events, often with their families in tow, just to catch a glimpse of the Holy Father on this historic occasion, who did nothing but show their love for the Holy Father and for the Church through their presence, their penance and their prayers? I guess they don't count either!

Which patronising idiot decreed that you had to be up there on the Sanctuary or you weren't "involved"?

It makes me soooooo mad.

There are only two types of people who would make that sort of statement: the hard-core feminists, who didn't turn up to the events anyway and the wishy-washy men who hope to curry favour with them by parroting politically-correct phrases without thinking them through...
Posted by Mulier Fortis on 6.10.10

Many thanks for this! Too many women have been led up the garden path, believing that their ministry is only validated and valued if it is a public, liturgical, ministry. Such denies the real meaning of the 'priesthood of all believers'.

I like the "serviettes". I also like the comment of an elderly Irish lady I once met outside Salisbury Cathedral, around the time the Anglicans were ordaining women priests: "Sure and women do all the work as it is, why would they want to take on more?"

I think there were some priests in wheelchairs and one whom I assumed was deaf-blind who appeard to have someone facing him signing into his hands at Cofton Park.

People who make comments like that have no idea what's going on. There was plenty of stuff going on on that field by everyone to make sure that we were OK and all the children stayed happy. Maybe that's not considered important by some people? Not something I would give a second thought to. Let the clergy do clergy things and let the laity get on with being laity.

Ben T has already commented on the 'need' to have Bidding Prayers in multiple languages with a different person reading each.

Personally I do not like the name "serviette". That is for secular use with a meal. We are altar servers the same as the male ones. Liz.

It is most disturbing that clergy should be making such comments. They really should know better. They should know that we all, including them, should be there to serve and fulfill our specific tasks in whatever capacity we serve in the Body of Christ; not to collect accolades or make up an artificial quota in any of our functions. And certainly not to pander to misguided feminists or put on a politically correct show!

And I agree that it is very patronising to women. The same as when people think us mere women incapable of understanding that the English language uses the word 'man' to denote both man and human being.

Leutgeb - ok, I corrected my rant a little...

Catholicofthule - I suspect the clergy were parroting what they'd heard some of their militant womynpriest wannabees say...