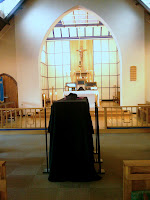 Today was the regular Missa Cantata at Blackfen. We're lucky enough to have a visiting schola to sing on the first Saturday of each month.

This month's Missa Cantata happened to coincide with the anniversary of the death of Fr. Bailey, a former Parish Priest at Blackfen. And so, it was decided to make this month's Mass a Requiem.

I had never seen unbleached candles before!

I attended a Requiem in the Extraordinary Form once before, but it was a Low Mass. I was pretty bowled-over by the experience, and promptly declared my desire to have my own funeral celebrated according to the usus antiquior.

Well, now I've seen (and heard) the Missa Cantata version, I want my funeral done THAT way. Unbleached candles, sermon at the end of Mass, absolutions at the catafalque, black vestments, bells, incense, the lot! Oh, and a few of you busy on your knees, praying rosaries for the repose of my soul, thank you kindly... and don't forget to pray for the Holy Father with the intention of gaining the Plenary Indulgence!

I didn't manage to get many photos - the new phone camera has a super-dooper focussing arrangement, which means that it takes ages for the photo to be snapped after pressing the button... and so I missed the Elevation of the Host... but I did get the Elevation of the chalice... 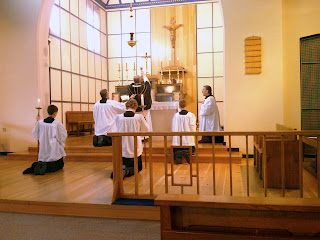 Hopefully, I'll soon learn exactly when to press the button in order to capture the exact moment I want...
Posted by Mulier Fortis on 6.9.08

Betcha if the priest spoke up a weensie bit you'd have a clue when to snap!

Heheheh... actually, the genuflections and Elevations don't have any spoken words at all... AND they DO have bells rung...

The problem is, once the button is pressed, there is a short delay while the camera focusses. I just have to learn what the delay is...

Yes, my phone camera has the same gadget on it. Once you get used to it though I do find it helps to get better pictues - usually in focus - unlike my earlier efforts which were a bit 'hit and miss' (mind you that probably was something to do with the person operating it! hehe)

I'm really enjoying your blog, having only recently begun to 'tune in' regularly

Your photos are awesome :)

Thank you very much miss, hope that this mass will be held soon in my country, Indonesia.