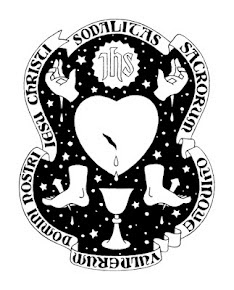 I only took a few photos, and they can be seen on my Flickr page. The dates and times of future meetings are to be confirmed, but if you want to join the Sodality, you can keep an eye on events by checking out the Sodality blog. More information about the Sodality and its Constitutions can be found there too.
Posted by Mulier Fortis on 17.3.12

The old calendar (this is from an 1891 hand missal) provided a focus for Lenten preparation by going through Christ's suffering for us. Mass each Friday and a short homily would give a structure for prayer and meditation.

Friday after the first Sunday of Lent is the Most Holy Spear and Nails; after the Second, the Holy Winding Sheet; after the Third, the Five Sacred Wounds; after the Fourth, the Most Precious Blood; and after the Fifth Passion Sunday), the Seven Sorrows of the BVM.

Wonderful and welcome back. Love the photos.

A variation from the above,

From the Antiphonale 1912 (Roman Rite)

One of these years we should revive all these Masses

How tragic that Sodalities have fallen by the wayside of parish life.

How many now would even know what one was talking about.

Sixupman: you are very welcome to join our Sodality if you would like.