How To Bowl A Maiden Over... 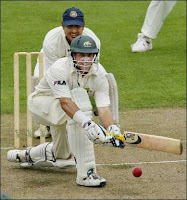 Yesterday, the cricket happened to be on TV in the parish club. I mentioned, in passing, that I didn't understand the rules of cricket, and how it was that, if England were in the lead by 6 runs (or whatever it was) that, actually, Australia was winning.
Bad move.
In the space of about ten minutes, I was taken through fast bowling, slow bowling, creases, overs, top-spin, seams, stumps, bails, leg before wickets, hand signals used by umpires, fielding, wicket keepers' gloves, batting for six, or four, running someone out, boundaries, wide balls, no balls, calling, polishing one side of the ball to give it more spin, the minimum number of overs in an innings, and the ten-minute gap between innings.
I then started to watch the cricket. Only there was less than ten minutes before the end of the match, so, although England were in the lead, Australia couldn't have their innings and so it was a draw, and the match ended, or something.
Maybe.
I only managed to grasp that much because I was on the coca cola rather than anything stronger.
I was also told that there aren't any rules in cricket. There are laws.
I still don't quite understand why they're playing for an ashtray...
UPDATE: Miss Ellen has added a little clarification. I would also like to point out that I shall try and pay attention to the match, if it's still going on, after Rosary and Benediction, when I shall be in the parish club again...
Posted by Mulier Fortis on 13.7.09

How can you NOT be TOTALLY into cricket?!?! Arrrrgh!!

My two cats will happily sit still for the whole five days of a test match. Of course they'll sit still quite happily for five days even without the cricket but I am sure that they enjoy it. How could anyone or anycat not enjoy test cricket? I am sure that they agree with me that 20-20 is a nasty vulgar novus-ordo lite form of cricket, and that only good traditional usus antiquior test match cricket is worth watching.
--
Fr Steven Fisher
Ramsgate, Kent, UK

To really get the best out of cricket, especially a test match you have to listen to TMS (Test Match Special) on Radio 4 with Aggers, Blowers et al. You'd enjoy the references to the cakes sent in by loyal listeners, I'm sure, and the observations on the antics of passing pigeons :-)

Oh, Mac. C'mon. Didn' you play this in school or something? Or did the boys hog the pitch the whole time?

[Although I think you'd HAVe to be a boy to be dumb enough to play "silly-mid." You can recognize them as guys who wear a lot of white and have no teeth.]

many years ago I was told that Cricket was the only time the English wear white to a funeral!:-)

Thanks for the link, Mac. Depending on what time Rosary and Benediction finished at Blackfen, I guess you didn't have an awful lot of cricket to watch :-( We were away for the weekend and every time the Paterfamilias heard the score via someone's iPhone, the comments were not repeatable - especially not in the Retreat Centre!

You keep one side of the ball polished to help it swing, not spin.

Simon, I shall go into the garden and eat worms...

...it must have been unpicking the seam on the ball which causes it to spin...

...though I gather that this practice is "not cricket" !

I was going to write something really interesting about cricket, but can't seem to keep awake long enough to get... my... thoughts... down on the screeeeeeen.... Zzzzzzz, zzzz, zzzzz.......

Well Mac, I also do not understand the rules of cricket and having had them explained, I am still none the wiser.
I always thought it was like rounders but you run in a straight line? there and back, I guess that can't be right either????

I think you spend too much time in that club!